It was nice this weekend to get a bit of relief from all that wet stuff! Although a bit nippy, the early mornings were very pretty with the frost across the landscape! 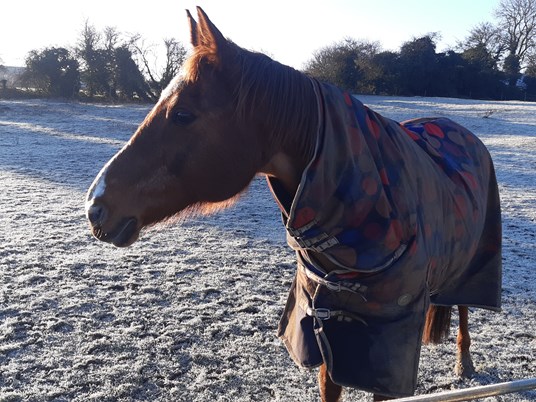 The fields were also a bit better to walk across as the ground had hardened hurrah (my backs been getting better gradually – yet I have slipped over three or four times in the mud the last week as it was like walking on a sheet of ice each time making it twinge, ouch!).

Unfortunately I couldn’t make it out to the show the other weekend which really disappointed me. I had been prepping with Bob all week after work with his schooling and he was doing fab.

Come Saturday morning I decided to do some practice jumps, nothing too high, but he was a bit excitable and the first straight bar we did he must have almost cleared the wings!

He decided last minute to take a stride out and launch, causing a bit of an unsteady landing in the saddle for me!

I brushed it off and continued happily jumping, but as the day wore on my back got a bit stiffer ☹. I got all the tack and bits ready Saturday night, then Sunday morning as I went to get up – the pain was back! Argh!

With the heavy rain overnight and my bad back I decided to opt out fighting the horsebox out of the field and making my back worse much to my displeasure.

I decided it was not worth risking further injury and being out of the saddle for longer, than missing one show (but that doesn’t mean I didn’t have a sulk that whole morning about it!).

My back is now 99% of the way healed with just the odd minimal pain so I’m back riding but no jumping for now – hopefully in another week!

I have had my pals joking with me about how accident prone I have recently been, as on dismounting Bob the other day and being cautious about my back I managed to twist my right wrist badly and I sprained it d’oh!

Then the following day on leading the mares down to the yard, Aria spooked, ran into me and kicked me in the ankle!  That’s it now I’ve had my injuries for the year thanks!! Although I am now looking into the idea of bubble wrap or cotton wool reinforced clothing for when I’m dealing with any equines! 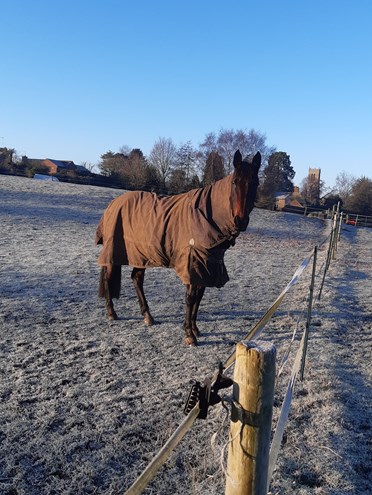 Arias has been kept busy in the last few weeks – with a lot more lunge work to try and burn some of her energy and attitude off – and luckily it appears to be working!

She’s still a grumpy sod over the stable door but has lost the challenging attitude when in the field which is good as I had started to question myself as to why I put up with such a moody mare!

I want to practice a bit more in hand work with her so I can potentially get her out for some inhand showing – the only issue is she has to be in the mood to trot when you ask (on the lunge she’s fine – in hand on her own she’s a stubborn moose).

Any advice suggestions on this would definitely be helpful as at the moment I may have to resort to bribery!

The old gal has been on good behaviour both ridden and in her field- I’m hoping I have cracked it in relation to ‘bringing in time’. I decided from the minute they started to live in for winter that I would always do the poopicking ahead of leading them in as otherwise they would anticipate it the moment they seen me and tear round their fields like a tornado.

Autumn and the others now see me, come over to say hi and then stand by their respective gates until it’s their turn to come in (Bob tends to now dose off by his gate haha)– and this is even if other horses at the yard are brought in before them.

It sounds so small but it originally caused a lot of stress and worry that they would injure themselves or destroy their fields so to see them calmly standing there is so nice!

Autumn has got one issue at the moment though – the dreaded mud fever! She had been fine but I think she caught her leg one day as I found a small cut, and despite keeping it clean and her boots the wet weather caused issues and she’s developed a small bit of mud fever! ☹

Lucky for her though as she’s had it previously I’m prepped and on it, and have all the bits to get it cleared up! I’ve cleared the scabs so just waiting on the skin to fully heal now and fingers crossed it will all be gone.

It is such a pain and I don’t like seeing her sore but with all the wet weather I’m shocked I managed to keep her from it this long. I am lucky though that both aria and bob have dark legs so are less prone to it! 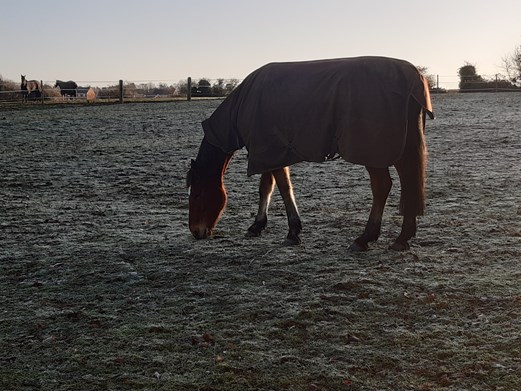 It’s getting ever closer to Spring and I for one cannot wait! I’m going to try a few more shows on grass with both Autumn and Bob this year. I’m not very confident competing on it (mainly due to falls and it hurting more on landing!).

So I am determined to overcome this fear even if we do the smaller classes to start with! I also really want to try some dressage with Bob as we’ve been working on his schooling (and I’m getting a lot better with the dressage saddle too and the longer stirrups). I’m keeping my eyes out for the upcoming ones to see when we can get to one!

I’m not sure what I am going to do with his mane though as he’s rubbed a bit of the middle out so may well have to look at the ‘less strict’ events until it grows back. Otherwise he may get laughed out of the arena!