I'm very excited about this year as I have a lot of plans as to what I want to achieve so best get my butt in gear!

Annoyingly my back is still not 100% - although it felt better in the afternoon before I started back at work - typical grr!

I did manage to summon up the strength (alongside some pain killers and a few stretches) to clip the big lad though.

I'm a bit disappointed with it as I couldn’t do it as big as I wanted due to twinges in my back and not wanting to catch him by accident.

As Bob hates clippers he had to be sedated with the 'strong stuff' so although he was very dozy he did keep coming round when I used the big mains clippers, so I had to keep reverting back to the little clippers which took an age to get through his coat! 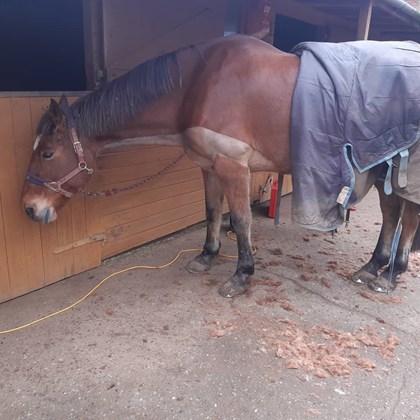 He is clipped though so should be a bit cooler! I'm hoping to have him out at a showjumping competition on Sunday; I'm sure it will be fine and I won't push it by doing high classes, but I really want to get him out!

I did climb aboard just before the weekend for a short session - managed walk trot and a secret short canter (when my partner wasn’t about!) I felt okay in the saddle - it was just the getting down part that was the issue especially from his height and me being a shortass!

Lol! I managed it though and also managed another short session with him on Saturday morning too, which involved a bit more canter work 😊. He was brilliant and didn’t play up once considering he hadn’t been ridden (only lunged a few times) over the whole Xmas break!

I was so proud of him, and I think his new calmer (Global Herbs MagCalm) has been having a great effect on him as he is nowhere near as sharp as he used to be! 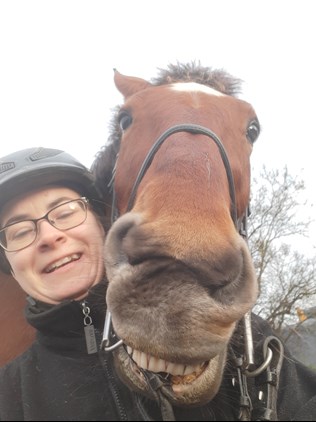 We've had another new horse arrive at the yard too and Bob is loving it as the only male again! Surprisingly he has not shown off - instead it has been Autumn who has gone in to Mare/Stallion mode - trotting and prancing down the drive, head held high, neck arched etc - like leading a prancing bull!

She does look beautiful while doing it - I only wish she would do this in the show ring instead of going round like a gormless moose! I also dislike the occasional fly bucks she was putting in down the drive one evening where even Aria had eyes on stalks wondering what the ginger princess was playing at!

Autumn did redeem herself though as I took her out for a short hack Sunday morning, and she too hasn’t done too much over Xmas as I only managed to sit on her once and lunge her too. 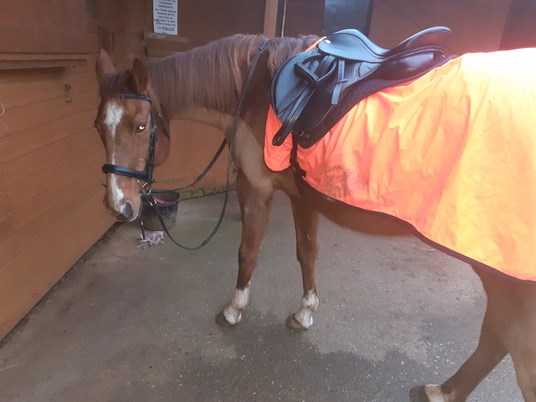 We went out round the village and her behaviour was fantastic even with a few speeding cars, she didn’t flinch once or put a hoof wrong which I was so grateful for! She always takes good care of me and is such a good girl!

She is also still doing brilliantly on the EquiNectar and absolutely loves it - everyday her bucket is licked clean! Her coat is in fab condition and she just appears a lot more chirpier/radiant in herself which is brilliant considering shes approaching her 22nd birthday in a couple of months! 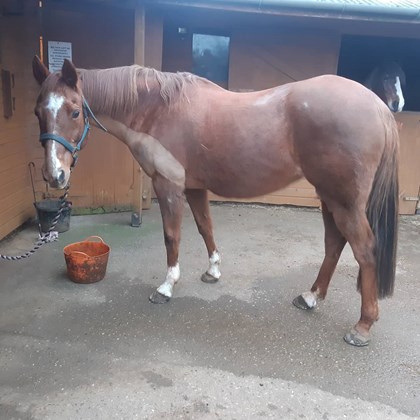 Aria - well miss attitude is back in full force, getting quite cheeky and bolshy, so as soon as my back is at full strength she is back in full time work as she is certainly taking this as an excuse to behave badly - nipping, headbutting and also chasing my partner across the field!

She seems to sense the minute I'm not 100% and take full advantage the little devil! Well she's in for a shock this year as she's going to be working a lot harder and doing a lot more!

My partner's on one at the moment in relation to revamping my wooden jumps as with all the rain we have had and being stored outside they are looking a bit worse for wear and some of the feet were hanging off!

He's done one set so far and had to chop them down a bit due to rot but they look really good (I'll try and get a pic when complete), and he was beavering away at two others last night so hopefully soon I will have my full set back together - I'm very lucky he likes jobs like this and is a dab hand with wood work 😊

Has anyone made any resolutions or have plans for what they want to do with their neddies this year?

One of the things I want to do is to work more with poles - I've joined a group on facebook that have lots of different ideas for polework exercises and I cannot wait to start giving them all a try - there are so many variations so should make schooling a lot more interesting!