I have now been to my second western show and first western championships and I have learnt so much, however what I have mostly taken away from the experience is that I still have a never ending amount of things to learn and I definitely need to increase my lessons and support.

The western show was run by WES (Western Equestrian Society) and held at Sovereign Quarter Horses, which is the same venue I have my lessons at, and the same venue as the last western show, so it was nice to be on familiar turf! I only entered one class, and unfortunately had a busy afternoon as it clashed with my sons birthday, so it was very much a case of arrive, do and go, which was such a shame as I was really hoping to spend the day and see a few of the other classes, as this was my only opportunity to see a western show in action before heading off the AQHA championships. 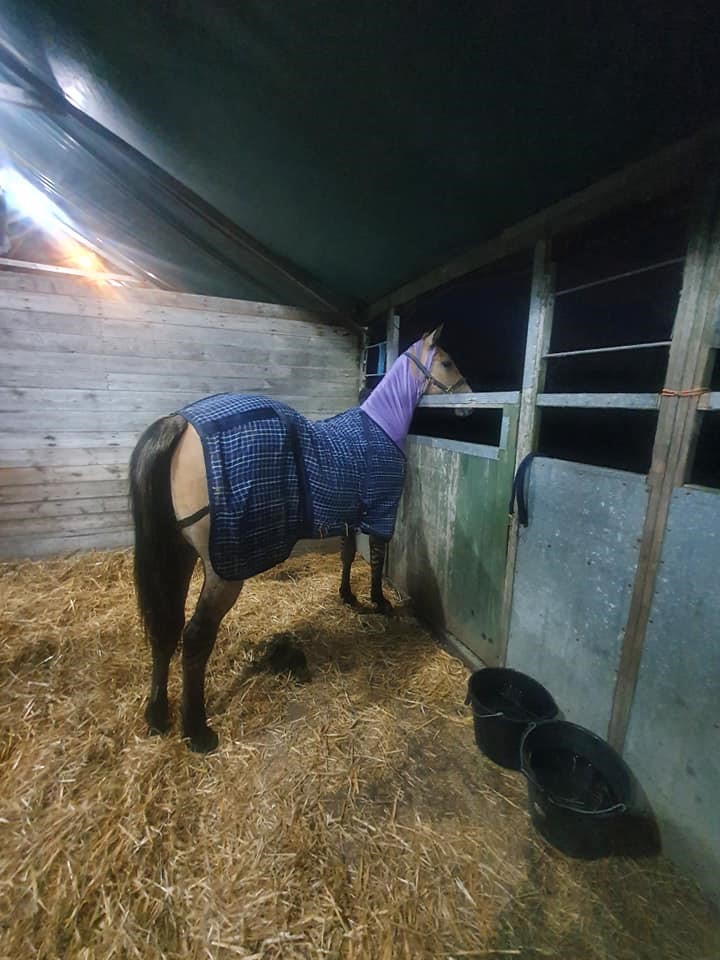 I arrived a little later than wanted to, as morning birthday present opening took longer than anticipated, but I arrived with enough time to have a 10/15 min warm up - Well I would have if another horse hadn't decided to break lose, run past us, making Django incredibly excitable and hard to hold and then refuse to be caught from the warm up arena! Oh well, straight to the arena it was! At this point I realised I have held my breath for the entire time I have walked up to the arena, feeling sick with nerves and stressed that Django is stressed. Luckily when we arrive at the arena I see a few familiar faces in my class, which puts my mind at ease, and realise I am last in the running order f the 7 other competitors, so I have time to chill and watch. As always Django was his amazing self, he went through his pattern with no spooks and tried really hard, only making green errors to be expected from the only yearling competing. We came away with a 5th place, which was a nice surprise and some nice feedback from the judges, also some well received constructive criticism, as I am so new to all of this, I struggle to see and know exactly where I have gone wrong and how things could be improved. It was a quick dash home and a nice experience overall for Django.

Now to get ready for the American Quarter Horse Association Championships. This was daunting. This was ridiculous. What was I actually thinking?! I think I felt sick the entire week building up to this show for so many reasons - I had never seen a full western show, I have never had any formal training in the classes we were entering, I had never even seen a halter class (and I had entered one) AND I was having to go alone! It was a nice drive up despite being an hour and half away, and Django stood on the lorry beautifully while I went and checked out the surroundings! I needed to find where to camp, where his stable was, where the arenas were for the morning and more importantly where to sign us both in. I must have had a very obvious perplexed look on my face the entire time as I was inundated with offers to help, which was lovely and reassuring. 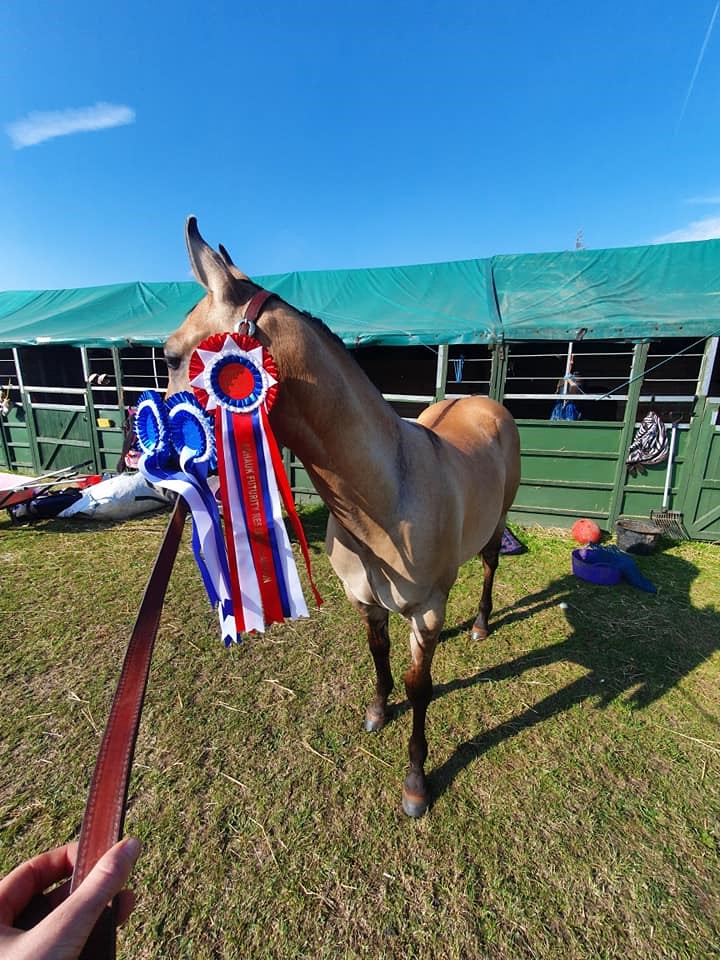 Once all settled and Django all tucked into bed I was able to go and watch the evening performances in the main arena with a gin (for the nerves) and I was totally absorbed by the whole evening, watching the best people in the game do the most amazing reining classes. I also saw a familiar face from the WES show and thankfully she was more than happy to answer my (zillion) questions. I realised when I went to bed I must have sounded like an 8 year old who had never seen a horse before. After 25 years of being around horses, it is actually a refreshing and exciting feeling to have so much to learn.

My 6am alarm went off before my head felt like it touched the pillow and it was time to get Django into the main arena and see the showground before a spruce up and the real deal. This nearly went wrong in the first 2 minutes of the day, when Django unexpectedly spooked at a pigeon, which was so out of character that I nearly let go, where he would have been lose to disrupt the entire stable area, thankfully I am quite inept at grass skiing, so managed to hold on until he calmed down! We proceeded to the main arena, full of other horses, lights, commentary practice and busy eating areas, only to have him not react to a single thing, much to my relief!

We went back to the stables with a hour before show time so it was 55 minutes of cleaning up him and a 5 minute quick change for me. Our classes were pretty much back to back in the morning, so it was reassuring to know I just had to fight these nerves for a couple of hours and we were both done to relax. 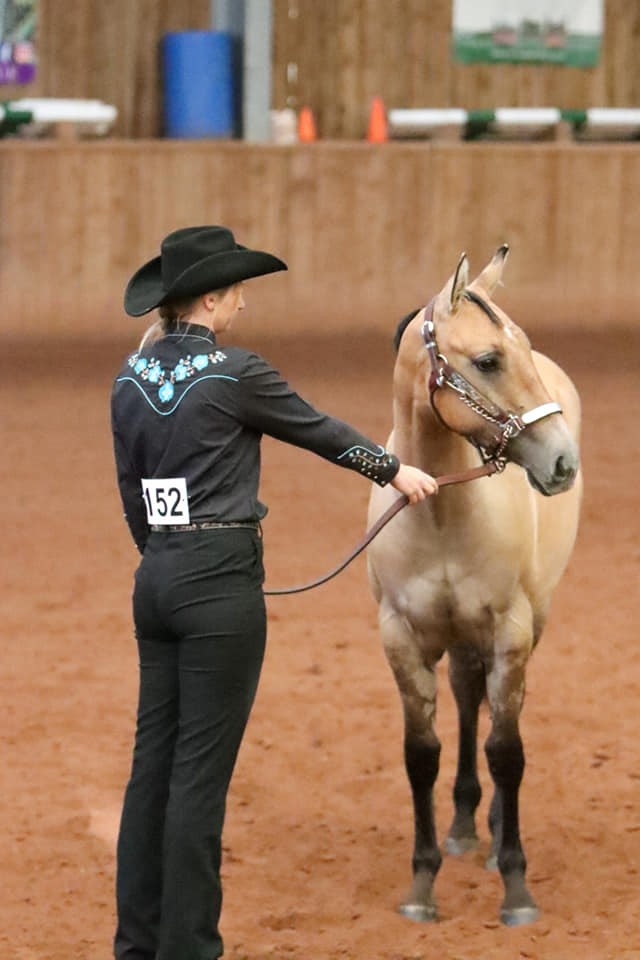 After watching a few of the people go before me I suddenly realised that we were competing against the next level and way over our heads, which was spotted by the most wonderful steward, who gave me every free moment she had, to had to talk me through the classes, the rules, things to do and not do and I honestly owe the entire day, and not having a complete breakdown to her! Also one other competitor, who was amazing and came away with some firsts and seconds, also gave up her own warm up time to give me some tips and pointers. It was so wonderful that I actually forgot all about my nerves and just enjoyed the atmosphere and being there. We came last in both our classes, but I wasn't in the slightest bit disappointed. He was the only yearling in one of the classes again, and in the yearling class we were up against one of the most renowned breeders and riders in the country, but the feedback from the judges and other competitors made the whole experience one that I cannot wait to get back too!

It was a very long morning for Django who was so delighted to be back in his stable, and after I got changed out of my shows clothes and went to check on him before lunch, all I could hear was giggling and snoring - He was flat out asleep with an audience of people who were completely bemused at how loud his snoring was! I went to the main arena as a spectator to watch the days events, and watch my trainer David Deptford pick up Supreme Champion! All the way home I just kept thinking "When can we go again!"