How to care for a new-born foal

The birth of a foal is an exciting yet daunting time. Foals, like babies, require a lot of TLC, especially during the immediate post-birth period. They won’t be tucked up inside a cot; they’ll be up and about in a matter of hours, needing to feed and build strong bonds with their dams.

No longer in the safety of the womb, a foal must lay down a regular pattern of behaviour as soon as possible, nursing, sleeping and socialising. Any delays or deviations could spell serious trouble and a vet must be called immediately ­– foals can deteriorate at alarming rates.

There’s no reason your foal shouldn’t flourish and grow into a happy, healthy horse. However, you want peace of mind both dam and foal are covered pre and post-birth. If any medical issue arise, vet bills can quickly add up. 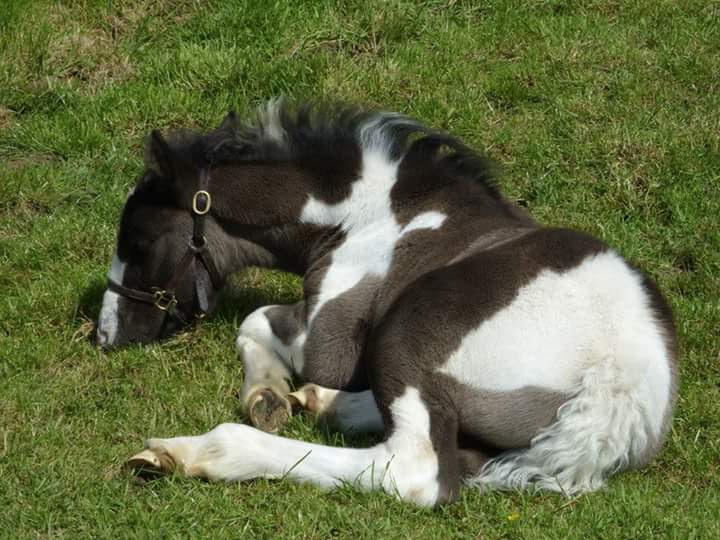 As soon as your mare’s waters break, it’s go-time: the foal is on its way. If all goes well, the birth should be complete after 20 minutes have passed.

While it’s important to closely oversee the foaling, you must maintain the role of observer, only intervening if an issue arises.

During the birth, you’ll need to keep your eyes peeled for several red flags.

If both legs and no muzzle appear in the birth canal, only one forelimb surfaces, or the soles are pointed upward, the foal may need expert repositioning.

If you see the vivid red of the detached placenta first, rather than the pale amniotic sac, the foal’s life may be at risk.

It’s up to you whether you opt to have a vet present at the start of the birth. If you spot any of the above signs or the birth stretches out beyond the twenty-minute mark, call the vet immediately.

Within the first 24 hours of birth, a veterinary exam of mother and foal should take place, catching any issues in their early stages.

The foal should start to breathe around 30 seconds after birth.

Don’t worry if the foal’s breathing seems rough or inconsistent for the first few breaths: for the first time, the lungs are being filled with air.

By the two-minute mark, it should be breathing evenly, taking roughly 60 breaths per minute.

About one minute after birth, the foal’s heart rate should hit around 60-80 beats each minute, and her mucous membranes will turn pink. Within the hour post-birth, her heart rate could reach heights of 120-150 beats per minute.

If a little clear liquid oozes out of her nose, it’s no cause for alarm.

As a foetus, the foal’s lungs are full of fluid. During the birthing process, the majority of the fluid passes, while some makes its way into the lymph and blood system.

There’s often a small portion of leftover fluid, which may well drain from the foal’s nose for around an hour post-birth.

A healthy foal will be alert and tuned in to its environment, having a peer around, blinking, shaking its head and propping itself up on its sternum. It should react to stimuli such as light and sound.

Avoid the urge to cut the umbilical cord yourself. Nature tends to take care of matters, with the cord severing organically when the mare shifts away from the foal.

This is best, as it reduces the chance of the cord bleeding.

Coat the cord’s stump in disinfectant straight after it breaks and over the new few days repeat this two to three times daily.

If the stump still bleeds a minute after severing, carefully cover it with umbilical tape.

Do not clean the foal either: this is the mare’s role and facilitates bonding between mother and foal. 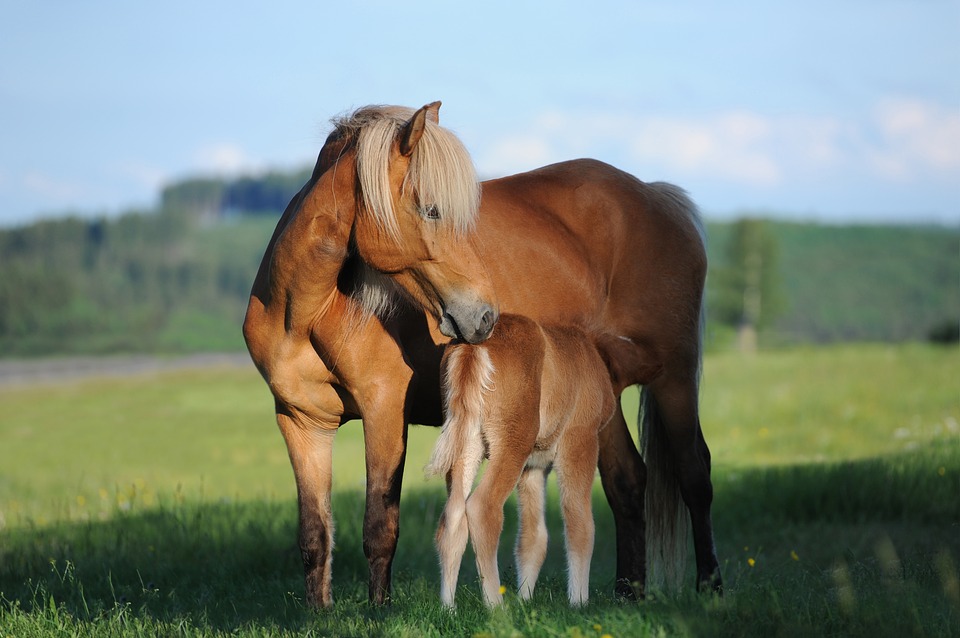 What to expect during the first three hours

Some plucky foals may attempt to get up and nose around early on – as soon as 15 minutes after birth. Most are able to stand by the one-hour mark, although others may take a little more time, exceeding the two-hour mark.

Newly standing foals won’t be the most elegant of creatures and commonly suffer from patchy balance, initially.

Once it’s up and about, the hunt for the udder begins!

Foals tend to search poorly lit corners, nearby walls and even the wrong part of the dam. Most will be helped along by mum, who will keep circling her foal and shift her hind leg to ease access to her udder.

It won’t be an easy feat, but ensure the foal swallows the majority of those precious first glugs of mum’s milk.

This delivers a vital cocktail of antibacterial proteins, antibodies, anti-inflammatory agents, hormones and nutrition to the new-born (known as colostrum). Foals should be suckling between two to three hours after birth.

Watch out for slippery floors preventing a foal from nursing.

Add plenty of bedding to help improve the foal’s grip, resisting the temptation to help it stand – the bones will still be forming so the application of sudden force could have a drastic impact on its joints.

You can never rule out accidents, so make sure your foal’s covered with reliable horse insurance.

Until the foal is 30 days old it can’t be covered on his or her own policy, but you can cover 30 days before and 30 days after the birth on a policy for the dam.

Bear in mind, the dam may be more concerned with passing the placenta than nursing, especially during the first hour.

She should expel the placenta a maximum of three to six hours after foaling – if she doesn’t, call the vet.

The efficiency of nursing will improve after a few hours, although young, excitable mares may need sedation to enable feeding, at first. 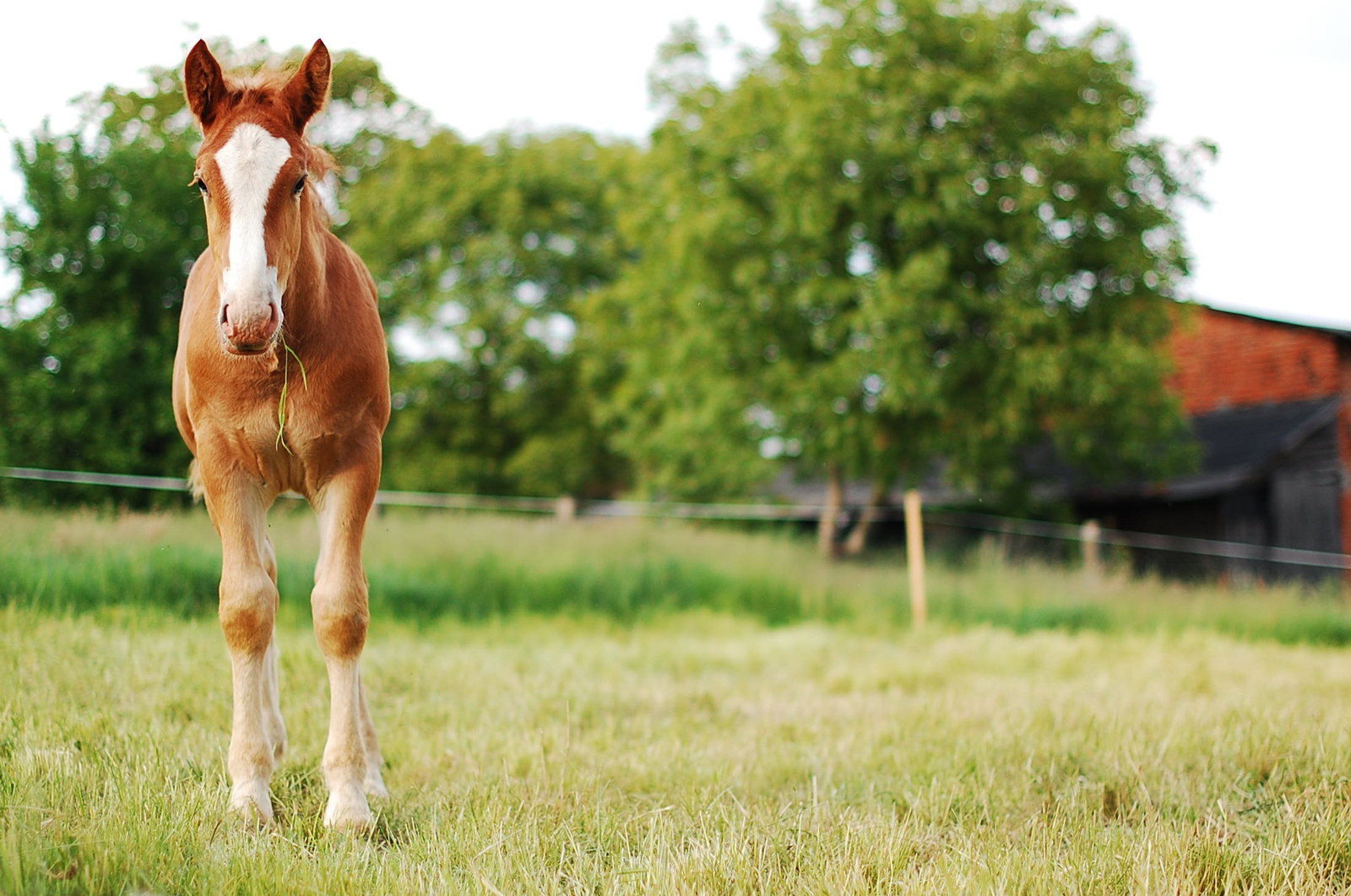 What to expect in the first 12 hours

At this point, things should be going a little more swimmingly.

The foal should have perked up considerably, playing, having a look around, socialising with mum and generally being nosy, before having another nap ­– this pattern will recur for next few days.

The foal will be more acclimatised to nursing, standing and feeding roughly every 20 minutes.

Sensitised touch and hearing are to be expected in a new-born, as is a laboured gait.

You should also spot black or dark brown pellets of poop – meconium – on the stable floor, excreted by the foal. Meconium is constituted of discarded cells, glandular expulsions and ingested amniotic fluid.

At around the 12-hour mark, the foal will pee, repeating the act every one or two hours.

It will still be standing up to nurse multiple times every hour and, believe it or not, it should be becoming more energetic, lively and playful.

The heart rate should decrease to around 80-120 beats per minute, and, per minute, the foal should be taking around 30-40 breaths.

Bear in mind, within 12 hours of birth, even healthy foals need a veterinary examination to check everything’s ticking along as it should be, so don’t forgo this.

Make sure you’re covered with specialist horse insurance, too – just remember that routine costs won’t be covered but lifesaving surgery is something we can help with. 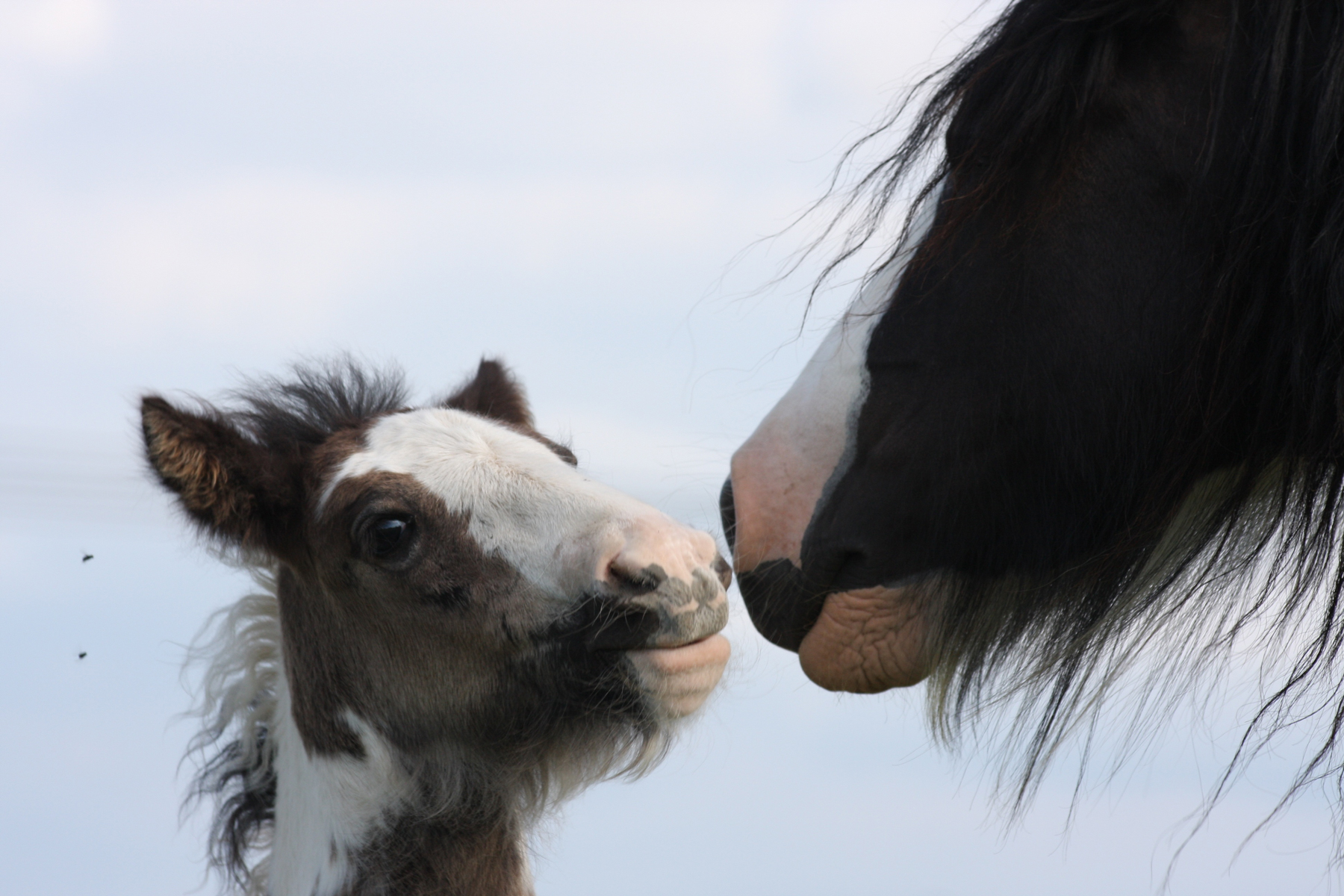 Your foal starts excreting soft, yellow-hued poop at around the 12-24-hour point. This is caused by the ingestion of milk and is perfectly healthy.

It should now have a heart rate of approximately 80-100 beats and take around 30 breaths, per minute.

The foal will still be inquisitive and playful when it gets up and will still nurse after every 20-minute interval.

A 24-hour old healthy foal should be ok to turn out in a secure, clean pasture, with mum in tow, of course. If you’re concerned foal and mare aren’t bonding, or if the weather’s rough, hold off.

Signs to watch out for

It’s essential to remember: early-stage problems affecting a young foal can have a significant impact on its health, carrying through to adulthood.

Throughout the initial 24-hour period, you must check on mother and foal every two hours. After the 24-hour point has passed, continue to closely observe your four-legged friends, looking out for any red flags – this enables prompt treatment to be given, should the need arise.

If you spot any signs of the following, call the vet immediately: 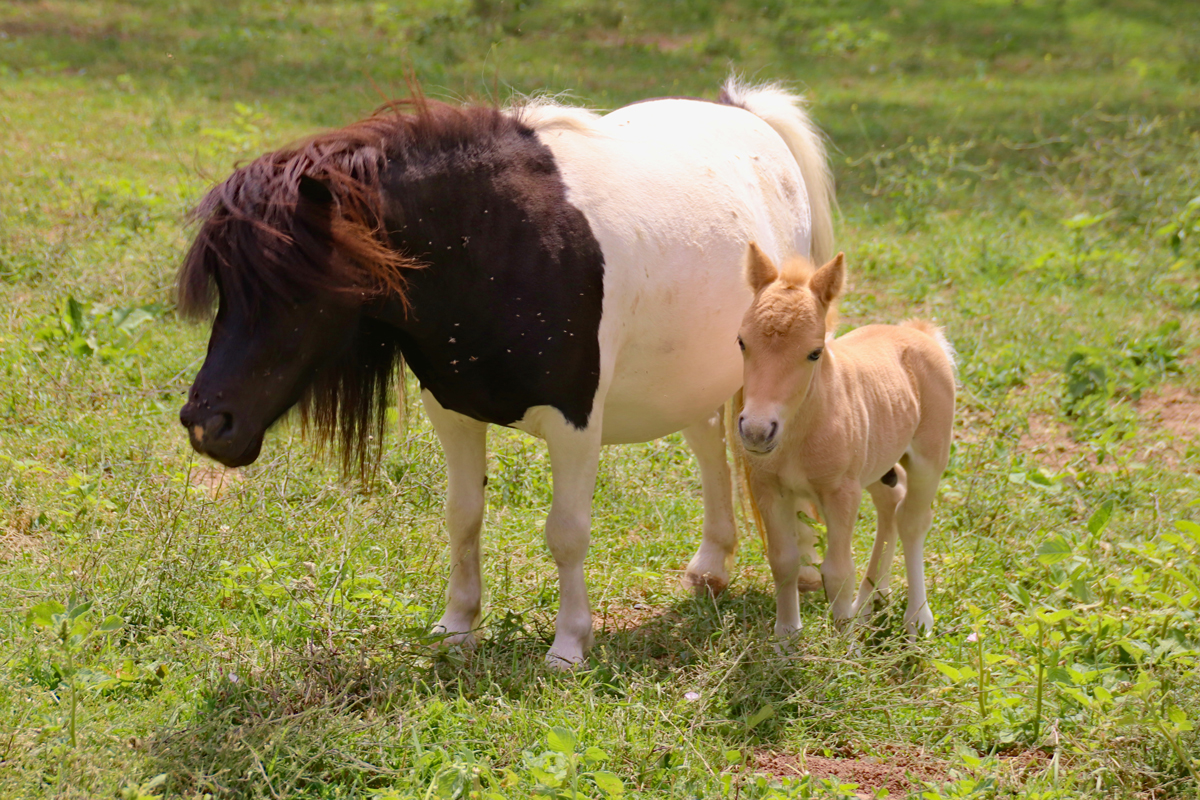 You’ll be eager to meet your beloved pony’s new foal, watching as she grows and learns about the world around her.

Here are 7 fun facts about your new four-legged friend that might surprise you!

Protecting your equine with horse insurance 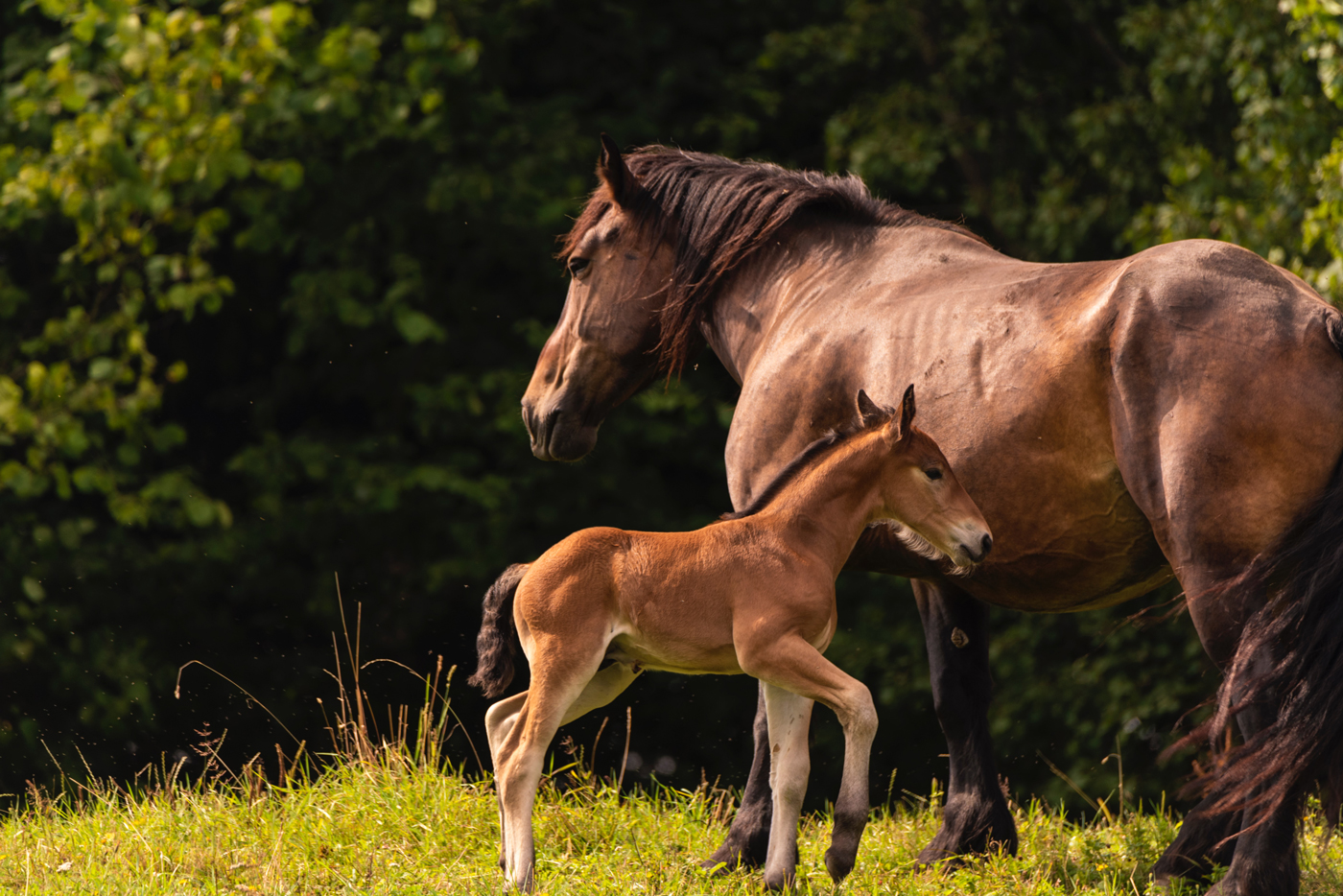 Equesure understands that every horse is different. Your newly born wonder might grow into a leisure pony or a prized competition equine – this is largely determined by you, the owner, as well as your horse’s breed and capabilities.

From foals through to veterans, it’s essential to secure specialist horse insurance from day one of ownership.

Foaling brings its own set of risks, but it’s worth noting: during foal-hood and adult-hood, equines may develop medical issues or suffer accidental injuries at some point.

Veterinary treatment comes with a hefty price tag, so you want horse insurance you can depend on. That’s where Equesure come in.

We’re horse insurance experts, with over 60 years of combined experience at our fingertips. We’ll find you specialist cover tailored to your needs, your horse and even your mode of transport.

We can provide up to £7,500 towards vet fees, giving you peace of mind and protecting your equine investment.

Enjoy the equestrian life, headache-free – get a quote today.