The Not-So-Secret Diary Of Diva The Shetland Pony!

Mabel is a model!
Local horse and pony rug company, Ruggles, put a shout-out on Facebook recently for a horse that takes a 6’6” rug and has a bigger, broader frame.
Mabel fitted the bill and so I contacted Ruggles, who do a range of rugs for heavy horses from size 6’9” to 7’6”. 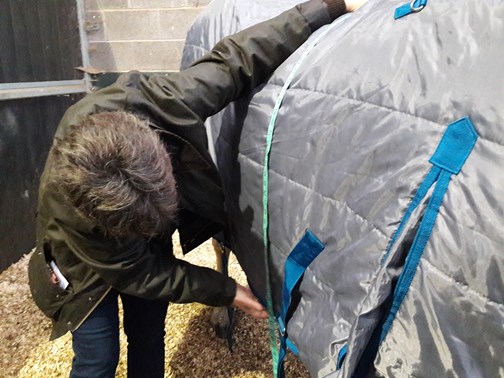 It had become apparent that some horses taking a smaller size rug still required the extra depth this range offers, and the owner of the business, Di, arranged to pop over to the yard with her tape measure to ensure a correct fit for the new sizes.
When Di first saw Mabel—a 15.1hh heavyweight show cob—she didn’t think Mabel was big enough, and I think she initially thought it might have been a wasted trip.
Mabel enjoyed the attention and stood like a professional while Di got to work with her tape measure.
Di had brought a 6’9” stable rug to use as the template, but since Mabel came up as only 6’, Di thought the rug would be much too large.
I assured Di that Mabel had always had 6’6” rugs, and to Di’s surprise, although the rug was only a few inches too long, the depth and around the chest were perfect. 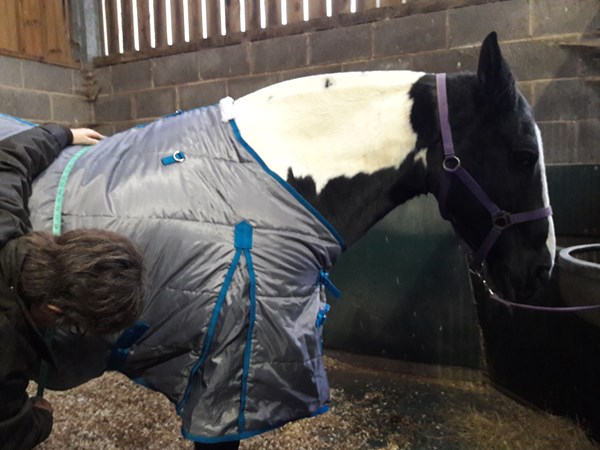 This proved that her research was correct, and I further let her know of the rugs I had bought for Mabel that came only halfway down her sides!
Earlier, I had re-hogged Mabel as I wanted her to look smart. I think she rather fancied the lovely grey stable rug even though it was a little large.
I am sure a new rug will be on her Christmas present list!
Measuring completed, I had to introduce Di to Diva as she has a Shetland pony of her own and so loves the breed.
In stark contrast to the clean and tidy Mabel, Diva was covered in mud after having a whale of a time in the sodden field that morning.
She had galloped around as if she was in the Shetland Pony Grand National and had incited Florence to join in while Mabel looked on with disdain!
Diva, obviously, thought she should be the model despite the mud! LOL!