My day at Your Horse Live!

So the horsebox is still not very happy at the moment, it’s been assessed several times and lots of tests done to see if repairs can be made….but ultimately it is not good news the old boy needs a lot of work☹.
The tensioners are bent and the cylinders leaking so I was recommended to source a new engine for it (easier said than done unfortunately).
I’ve trawled the internet for hours and contacted companies up and down the country to find only a few limited places have a replacement, but they are pretty much either end of the country!
I did get offered to have the engine rebuilt but it would have meant sending the box down to the south side of London which is a bit of a trek!
My garage did think it was possible for them to rebuild the engine, but they are having a lot of issues sourcing the parts so it looks like the search will continue for a reconditioned engine☹.
I’m crossing everything that we can get it sorted soon as there’s a few shows I have my eyes on as I’m desperate to get back out and we are getting cabin fever just hacking and schooling at home!
On the plus point, last week I attended Your Horse Live and had a brilliant time!
I of course, stopped by the Equesure stand to say hello a couple of times and had a nice chat with everyone, also meeting the team from Equinectar and having a discussion about their product and how it will benefit the horses. 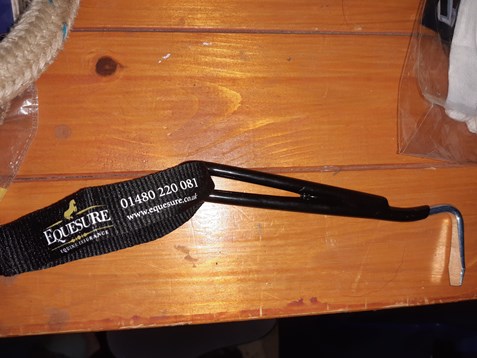 I was so eager to get in and shop we were one of the first few in the queue before the doors opened at 9.30am!
I was on a mission and at times my poor partner had trouble keeping up lol!
He did earn his weight in gold though as we did a lucky dip on the Cavaletti stand and he only went and won me a brand new leather head collar!
Apparently we were the first big winner of the day woo!
I was very pleased as I had gone to YHL with the intention of buying the horses some new head collars and leather ones at that, so I was beaming when they told us as I never win anything in those sort of things!
I haven’t put it on him yet as I am being sad and keeping it for ‘best’ for the shows so hopefully he will have it on soon😊.
I did buy the other two some slightly cheaper leather head collars so now all three have one each.
We also went over to the BETA stand where I completed a quiz and got it all right (yay me) and won a goody bag filled with lovely treats and samples for the neddies to enjoy!
I’ve also answered their other competition so let’s cross our fingers to see if we hear anything!
I did treat myself to two things for once (each year I normally only buy stuff for the horses never me although these items were actually required ones).
I bought a new hat, as from some of my previous blogs you will know the horses have kindly parted way with me (so was time to replace a couple of the hats) and also a new Gillet – mega bargain that was and it means I no longer have to hunt for my keys or phone when they have fallen out my pocket due to broken zips hurrah!
I treated my pack mule (as he called himself aka my partner) to a big sausage roll on one of the stands as a reward before encouraging him to continue round (okay by prewarning him if he didn’t come round with me I would be buying a lot more stuff ha!).
I think we managed 3 or 4 circuits of the 4 warehouses before my legs started to hurt!
We visited the rescue village where I met some beautiful ponies all of which I wanted to take home, and had a chat to some of the great charities looking after them.
We also spent time at a few feed stands to see any new products coming out and seeing if any are suitable for the troublesome trio.
It was a great experience going round all the stands and I really can’t wait for next year (although my partner is allegedly busy on all three days somehow.…) – I would definitely recommend going to anyone who hasn’t been yet!
Autumn was spoilt a bit more than the others as she came away with a rug as well as a new head collar – it fits her lovely, but I definitely won’t miss her in the field with it on, well not until it gets covered in mud anyway!
I’m looking forward to clipping her soon as well, we tried to catch a clipping demo whilst at YHL but seemed to always go by as one finished or before one started!
I’m not the best or most confident clipper but was pleased with the results last year, so hopefully they will look okay again this year once I do it.
Bob on the other hand I am dreading clipping – he’s still not happy with the sound so I have some sedative for him and once I’ve braved the shave with Autumn ill book him in for me to do too. Fingers crossed he doesn’t jig about like last time where he kept waking up!
We have had a few issues with fireworks the last week, one with a display being held the other side of the stables fields – but no one informing us!

Luckily a number of villagers posted about it on the village Facebook page as they were concerned about the horses and notified me so I was able to go and check them!
Although not a good situation, I and the other liveries were very grateful for the concern from the local villagers about our horses! All horses were okay, a bit stress but relaxed whilst I stayed with them.
I did manage to find out who the organiser was and did notify them about the importance of informing livery yards that were nearby as it could have caused a lot of problems/injuries. Especially with it being done right next to a turnout field where we did not know about the event – and luckily that evening I decided to bring the horses in.
Fingers crossed that’s the last of them so we can stop worrying about the horses being spooked.
The fields are awful at the minute (as I’m sure a lot of other peoples are too) so I’m on mud fever watch with Autumn.
She’s had her barrier oil put on as I’ve moved them to a field that’s muddy but not deep. Although they will be moving back to their winter paddock come the weekend so out will come the close contact chaps again as it is a bit of a bog round the entrance!
They were fab last year and she did not get one bit of mud fever so fingers crossed the same for this year.
Another horse on the yard hasn’t been so lucky and the owner is currently battling to clear the mud fever up, so if any one has any good suggestions for her send them my way and I’ll pass on! 😊
Let’s hope by the next blog I have good news on the horse box and the rain has stopped for a while as I’m sure we would all like a break from the mud sliding and ‘welly eating’ bogs (there are some funny videos and pics about!)
On the plus side we are heading towards the big C so I need to start planning what to get the neddies as their Christmas present…hmmmm!