It's been a bit hit and miss with the weather by us. Some days its just been overcast and others heavy rain (it seemed to always wait until I finished work, loaded the car and was on my way to the yard before it let rip with the downpours grrrr)! I did relent and ride a few times in the storms, Autumn was not impressed and would halt and turn her bum to the wind refusing to move unless it was back to the stable yard - the diva! Bob on the other hand – I started riding him as we seen clouds coming, but they came over so fast - I had only done one lap of walk before the wind picked up suddenly with rain and thunder – first thought was this is it I’m about to be ditched – but nope, he just continued on oblivious to the storm overhead! I was baffled but very pleased, we worked for a bit but the rain got heavier with added hail stones and we had to run for cover! 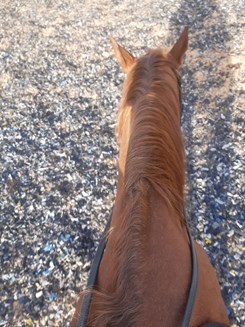 He’s been fairly good recently even doing jump work on the lunge and not loosing his head which was amazing. We sadly didn’t get to have our lesson the other week as our instructor fell ill but we should be on for tonight – which is a relief as I still haven’t decided who to take to the show at the weekend! I do want to ‘survive’ the show as its my birthday on Monday so I would prefer to be able to actually go out somewhere and not be in pain so we shall see on his behaviour!

I’ve been a bit sore the past few weeks, despite seeing an osteopath about my hip and sacroiliac joint (that’s where we think the issue is) it was all going so well but I’ve then had a few bouts of stiffness and pain again so I am booked in for another session next week, luckily my poor other half has given me a hand with the yard jobs so I get a bit of a rest. One thing he won’t do is fly spray them though, which to be fair I don’t blame him as Aria is very temperamental, and Bob has been too recently because he’s a bit sore as no matter how much repellent I put on him as he’s still getting bitten! He’s also decided he no longer wants to wear a fly rug and freaks out if it’s on and a fly goes under it, so he’s only got his mask on with a coating of repellent. He does have a new funny thing though – when I put fly cream round his belly and back legs he lifts his back leg up and holds it so you can put the cream on and he does this both sides – the first time I thought he was going to kick then I realised what he was doing haha! 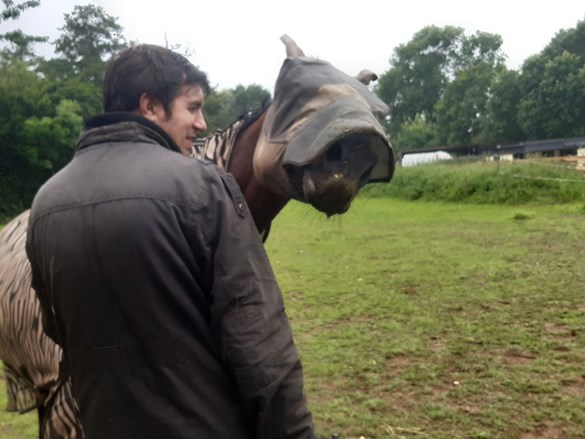 Autumn’s been treated to a new fly mask and my partners reaction was she now looks like a fly/bug - to be fair I kind of agree! I’ve not used a lycra pull on one before but she wasn’t too bad getting it on and seemed fairly happy so will see how long it lasts! Aria’s inherited Autumn’s newest fly rug as I noticed it was a bit too big round Autumn’s fine shoulders even when I did add a few holes to the straps and she was getting rubbed, so Autumn’s in her old one until the new one my partner ordered for her arrives (how do the horses get presents for my birthday?! Always the way). I was asked by my family what I wanted for my birthday and my other half just said look on the horsey websites – anything for her horses lol! Which to be fair is true, although I wouldn’t mind a new blouson jacket for me (I have physically worn through mine I’ve had it so long)– although I suspect I will be waiting until I go shopping at Your Horse Live to buy myself one! 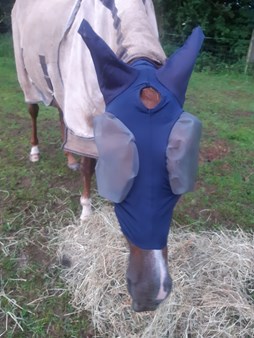 My partner has moved his car planter up to our yard to help desensitise the horses to odd looking things – it’s very pretty with the flowers and the horses seem happy with it – we will put in in the arena when I start doing courses so it helps them get used to flower pots etc being near jumps. He’s also just made a random purchase of a child’s sit in wooden pirate ship which he is converting to a planter. He will be adding a flag (yes a Jolly Rodger) and netting to it – he says this too is ‘to help desensitise the horses’ but I think it’s also the boy in him wanting to build a ship lol! – fingers crossed it works! 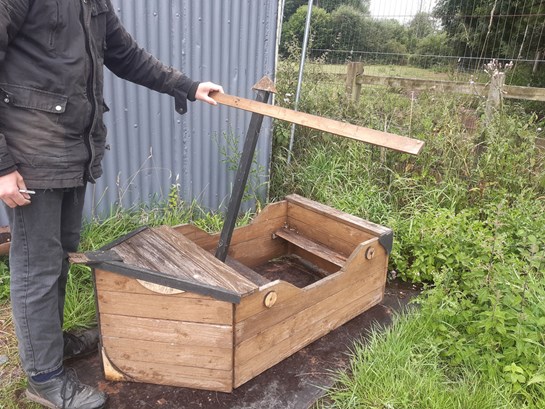 I’m hoping to organise a few hacks with one of the girls I met at the riding club soon as we both want to get out exploring as we are both new to the area so great we are ‘newbies’ together! I’ve also invited her to join me in some of my lessons as I would love the company and I’m sure it would help Bob get better in his fear of warm up areas and riding with other horses. We are also doing one of the Pass Wide and Slow awareness rides in September which I’m looking forward too.

I have to say this year has been completely different for me riding wise – its been quite good not to be fully competition focused all the time and actually have times where I do other things like the fun rides, training and now a bit of desensitisation.