Did everyone have an enjoyable bank holiday weekend? 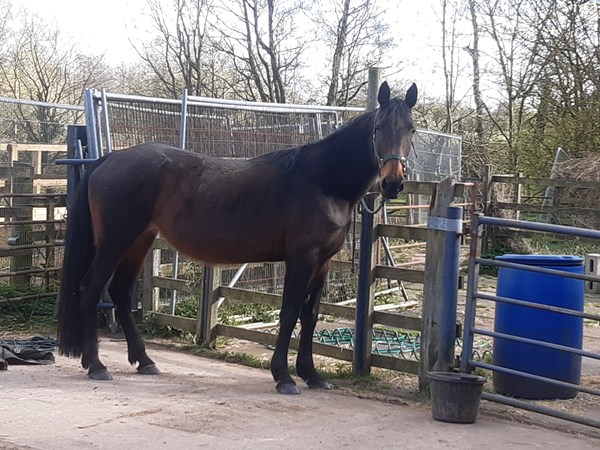 I was definitely in need of a few days off as the excitement of finally having the arena (and riding every day) plus getting to grips with my new job had made me a lot more tired than I realised, so the lie in’s until 6am each day were much appreciated! I didn’t let it stop me though and rode each day aside from bank holiday Monday as the previous evening, donut here managed to jar her ankle tripping down a drain at the yard so it was a bit too sore to get aboard with. It’s okay though – I had chocolate at home to help comfort me!

Saturday, we had our first outing of 2021 to an Easter Fun ride organised by the local riding club. Autumn literally ran on to the horsebox as we got prepped to leave – think she was buzzing as much as I was. As we still don’t know many people in the area we managed to link up on the riding club page with another rider who wanted a buddy to go round with so we both had company. Safe to say both horses were a little ‘fresh’ and excited as soon as we entered the first field so think we were both grateful to have another person there. We had some lovely strolls around the fields then got to a section that we were told we could canter round so had a nice loop and a few small hills, followed by a wander through some woodland before coming back out onto the canter track. We were coming to the penultimate field when the steward said we could go round the field again, of course we both said yes so we got to do another short section before the finish. It was lovely to be out again and also to start the year with a fun ride and getting to know new people. We also got a lovely rosette and some choccies at the end too which was a nice surprise. I’m keeping my eyes peeled for some show dates now so I can start prepping the horses ready as I’m determined to get out a lot more this year!

The big lads is back in full time work now and taking it well, he’s remembered his outlines and has tried to test me a couple of times (to no avail) just to see if I would let him get away with any naughtiness- but nope it didn’t work so he’s realised he may as well behave. I’m starting him off with dressage for his first outing so we have been starting to do a few of the intro tests at home as his schooling sessions as I find it helps him and me concentrate when working on something specific. 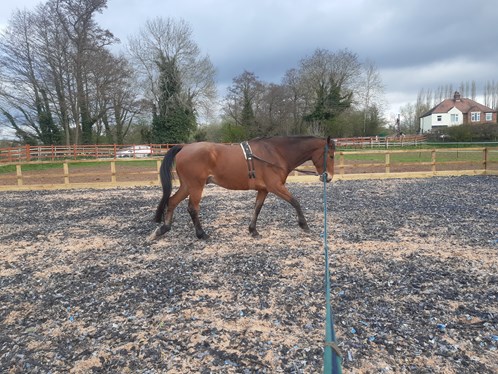 Aria’s a feisty little madam again, every time I take her in the arena now she has a good leap, squeal and charge around – a couple of times she’s caught me off guard and pulled me round argh! I’m hoping to get her started again with her physio work  and start building her up too as I want to try and get her out to at least one show this year if possible. She has gained a lot more weight from when she was poorly (still no idea what it was or why the weight loss), and looks so much better, just need her to lose that winter coat, as when she does she will go a lovely bright bay again! 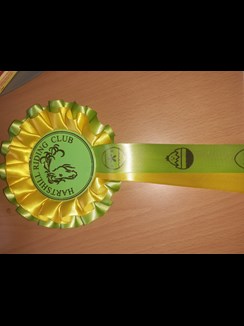 The weathers gone a bit odd the last few days, whilst at work it was in the 20’s then the minute I’m off it plummets and snows! The horses were just getting used to the rug-less life, and I was toying with leaving them out overnight. Now it looks like I may delay that by a few more weeks to aid grass growth and until it’s a bit warmer for them. The grass seed round the area has now started to spring up so hopefully by summer we will have nice new green sections for the horses. Alongside the grass sprouting I’ve also noticed the dreaded sycamore saplings-  they have covered one of the back sections of the summer paddock so each day I spend 15 mins clearing a load, and yesterday spent an hour with a bucket filled with them. They aren’t in the field for a few more weeks so I will keep ploughing on as I do have a worry about the potential risk of atypical myopathy  so would rather be safe than sorry, especially with the number of them I’ve seen in the field. I think ill just have to rope in my partner with the bribery of chocolate at the end once they are all cleared lol! I did think of enlisting my nieces and nephews in a ‘competition’ of who could collect the most saplings but annoyingly they are wise to my game back to the drawing board lol!