Aren’t the nights drawing in and the mornings darker already? I’ve had to dig out my head torch to see the horses in the morning now! Although it has come with some nice experiences – I’ve come across more wildlife in the early mornings – a small toad living next to the hay barn is regularly about in the mornings, the bats swoop around and you hear the owls from the trees. I missed it but my partner also seen a Roe deer in our field – I’ve seen muntjac but not a roe so will be keeping my eyes peeled for that one! 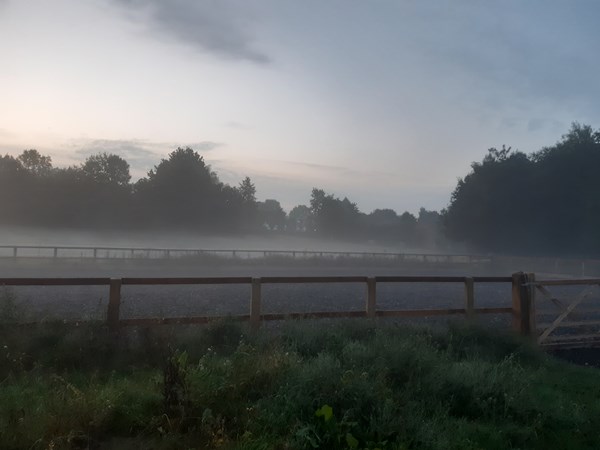 We had managed to get out to a new show/venue last week which is handy as its not too far from the yard. I decided to try to neaten up Autumns plaits by using thread instead of bands to do the buns – Big mistake! Lots of jabbed fingers and buns that would not sit right resorted in me going back to the bands. Autumns mane has got longer, but when its down it looks so nice I don’t have the heart to trim it, so I just keep trying to get the plaits as tidy as I can although afterwards her mane does look quite wild once they are taken out  lol! The showjumping class went okay-ish – Autumn was fab in the warm up – forward and sailing the fences, however on entering the ring – we had a lovely canter on approach to the first fence – until a very loud motor bike roared past on the other side of the hedge – Autumn’s nerves kicked in and we had a refusal! Her nerves were still on overdrive at a few more fences and we also had a knockdown, but we pushed on with me giving her reassurance the whole way round, and the second half of the course was perfect. We got a big round of applause despite the mishaps and she got a big pat and treat. We still somehow managed a 3rd place! The showing was not as good this time, the judge was very interested in her asking a lot of questions, however when the placings came she came 7th – I was quite disappointed but she had tried hard and behaved impeccably despite the onslaught of flies and heat. Once the class was over we grabbed an ice cream whilst sorting Autumn out then called it a day. I’m now going to be searching for some winter venues to start attending ad the summer shows draw to a close.

The weather was a bit mean to us this weekend – glorious for the Saturday but on the Sunday for our ride we have pelting rain, so my riding buddy pulled out even though I said I was happy to still attend as it looked like it might clear, which it eventually did but by then was too late. I still made good use of the time though and did more practice jumping with Autumn in the arena at home. I did notice at the show she has become a bit nappy at fillers so I’m going to be doing some more courses in the arena using them and the planks my partner is currently painting for me.

Bob and I finally had another lesson hurrah! We did some more grid work again, and worked on shortening his stride over fences as he lands so far away from the fence it can make it difficult if jumping a double or triple combination. Initially it was a bit hairy and poles were knocked here and there, and one of the cross poles I was told by both instructor and partner that he almost cleared the top of the wings as he catapulted upwards (they are only 1m 40 – OMG! No wonder that jump felt huge!) - but eventually we got it and there was no rushing, or charging, and all fences cleared at normal heights. We finished by making the last few poles into a spread fence – which initially I was nervy about but on jumping it loved it! He was nice and calm, I could see his stride and we jumped it with no effort! Really looking forward to the next lesson and I've even mentioned to the instructor about possibly getting him out to the local show if shes about to do an ‘onsite’ session!

The horses had their wormer the other evening and normally it’s an awful experience all round but not this time. I managed to trick Bob and get the syringe in and out quick before he realised, Autumn she was fairly good – but Aria – she seen the syringe and the evil one emerged…..but I was ready this time! I had previously bought an Easy Wormer – a plastic bit that goes in their mouth you syringe into – I admit I was very sceptical and thought no chance will this work. Well it was a bit hard to get the bit in due to the shape but once in and secure – syringe squirted, plunger in and wormer done–Aria didn’t even realise! Completely stress free for all parties and worked excellently so would 100% recommend it. It comes with an additional syringe in case you need to do the same for medication to! Best item I have purchased in a long time for sure! 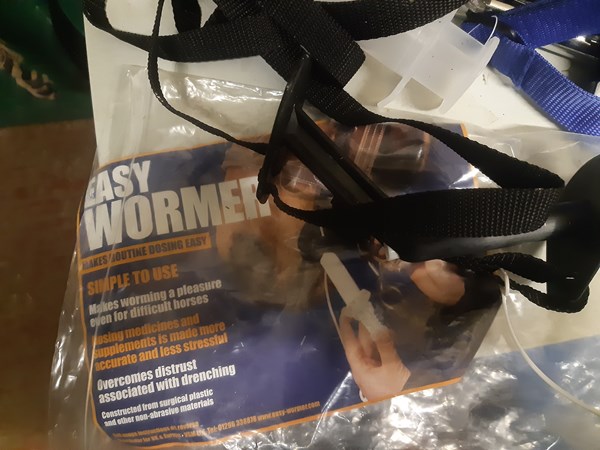 Talking of mouths….the horses have the dentist in a couple of weeks, I'm a bit concerned about it and hope they behave themselves– luckily it’s the same dentist we had last time so fingers crossed we both walk away with hands and feet in tact!