Paula's Blog - An Unexpected Whopper of an Outing!

Wow! What an outing we had with Autumn at the weekend!

We went off to our local riding club show again for some jumping and showing, as always I was fretting on the yard with the mane and tail plaiting as it was not going to plan, but I got it done (well all the mane and half the tail before we had to leave). We arrived at the show and I pulled up next to a horse outside a horse box that looked familiar – it only turned out to be one of my partners old work mates so that was nice meeting her in person and for him to have a catch up alongside meeting her friend who was with her too.

I got Autumn ready and we headed off to the jumping warm up where I could see the dreaded fillers in the main arena so had a pre talk with Autumn about them – it seemed to work as she jumped beautifully in the warm up and felt great. We then went in for our turn – the first fence was an oxer which filled me with fear as she doesn’t like them as the first fence in a sand arena let alone on grass! But to my surprise she jumped it even though I felt a slight hesitation from her, but after that – wow – she flew at every fence, clearing them all even at odd angles when she did handbrake turns (not my choice!). I couldn’t believe how amazing she felt she was super confident and eager again, then a short while later over came the judge with a red frilly!! She had been the only clear and also the fastest and won the class! Yeeeesss! The girls back on form!

We then had plenty of time to head for the horsebox and change for the showing class, I took on board the last show comments from the judge and put on trousers, and had a shirt and tie with my own hair in a bun. I managed to plait (if you could call it that!) Autumns tail and give her a final spritz of fly spray then off we went. There were a few in the inhand veteran class and I was quite nervous especially for the individual show – but the judge was lovely – he said Autumn looked fantastic for her age, her conformation was good and she had great condition. He loved her trot movement – she has a big stride so I literally had to sprint as fast as I could to show them off which made me puff! It then came to the decision- and I nearly fell over – the judge awarded Autumn the win! Even more shockingly it qualified us for the inhand Championship – I had never ever done one of these. The class came and in we went, there were so many beautiful horses and ponies and I was just pleased (and shocked) to have got that far. We all did our shows with me running like I stole her (judge’s words haha!) and then it came to the final line up – a little grey welsh was called forward which was beautiful and immaculate – and then…..he called Autumn forward - I had to pick my jaw up from the floor! Autumn only scooped Reserve Champion!!! I couldn’t believe how well she did and the judges words of ‘she is a credit to you’ did make me tear up I have to say! I was so so proud of her, especially as at her age I do worry if she is still okay to be going out – well she’s proved to me she’s more than happy too! We also met a lovely lady and her mum in the inhand classes who we are now arranging to ride out with regularly so we had an absolutely amazing show and made some new friends too! It was so nice to be out and the atmosphere was fantastic I cannot wait for the next one!!

Aria has not been up to much recently due to me focusing on the other two but she is being a pain at the moment as she’s decided she has taken a dislike to any spray bottle so fly spraying her (which is a necessity at the moment) is a battle, even when I resort to the gel and cream! The little minx is also obviously jealous of Bob getting a new mask as I found her one this morning in multiple pieces in the field – I’m taking it as a hint she wants a new one so better get looking! 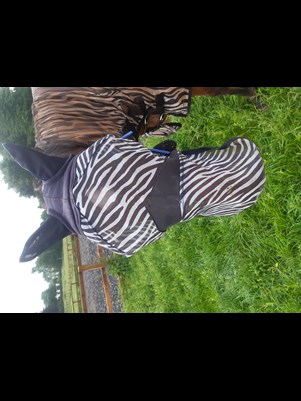 Bob has his second lesson tonight as I am hoping to get him out to a show soon too – however he’s in the dog house at the minute as yesterday morning as I literally just lifted from the mounting block to get aboard – he took off causing me to ‘superman’ fly into the floor – the arena sand does not taste nice! Not good as I had the osteopath the day before to sort my back out and was just beginning to feel better – I now have a very sore neck and ankle with a grazed arm and bruised leg. He didn’t get out of his ridden work thought, once I removed the majority of sand that coated me I got him back to the mounting block got aboard with no issue and off we went! To make it worse though an hour later my wood pellet bedding delivery arrived and I had to relocate 1 tonne of bags from one end of the yard to the barn at the other end argh!😫😱

Well I guess it says it builds strength and character so I should be full of both hahahah👌! Fingers crossed our lesson goes well this evening and I stay aboard! 🤞