Paula's Blog - Beginning to learn and back jumping

Where have the last few weeks gone? Feels like it flew by as we’ve been fairly busy.

We are starting to up the anti with our field maintenance and went to view a few mini tractors/ride on lawn mowers to help us keep on top of the weeds (mainly thistles and buttercups) in the fields that just seem to be expanding everywhere. We decided on one and had it dropped off to us, and yes within ten minutes of them leaving we both had a whizz round on it – I mean who wouldn’t - a new toy that you just have to test drive lol!! 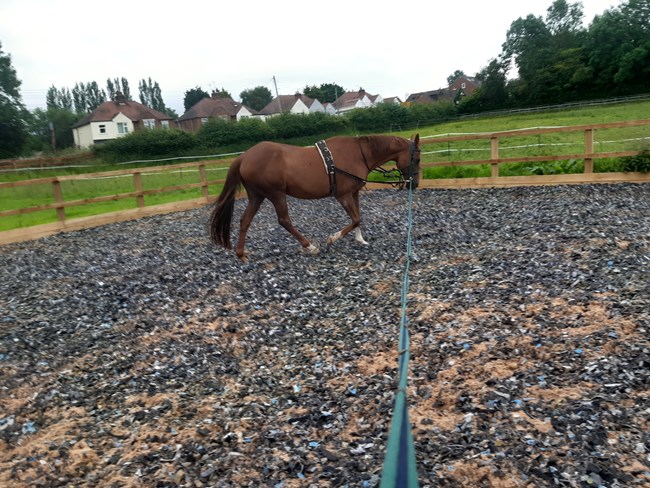 We’ve already had it out working in the fields and cleared a big section of thistles which it just ploughed straight through and cleared. We have a tow bar to fit to it too so we can use it to harrow the fields and level the arena when needed too. Hopefully we can now start to get ahead of the weeds and start some proper maintenance on the fields with mulching and reseeding so we have better conditions for next year.

The horses have been doing well, I’ve been doing more jumping with Autumn in the arena and upping the height which she has no problem with – it seems to make her more keen! She’s also been doing some more lunge work and has been doing very well, she accepts the side reins and has even begun to start working in an outline much to my amazement – only taken 23 years! We had planned to go to a show last weekend but had to change plans last minute but are still aiming to get her out to the next show on 10th July to do some more jumping and in hand classes.

Now we move on to Bob – well he’s been a bit hyper since his first lesson – we tried some jumping on our own and on several occasions I was almost catapulted out of the arena of his excitement blew his mind – so back to flatwork we went!

Unfortunately the last instructor who came out is tied up with her horses and competing, so I turned to the helpful social media for some recommendations for instructors and as always it didn’t let me down. We had our first lesson with a lady who was recommended by a number of people last night – and well what can I say?! I did not feel like I had a lesson at all by the end – Bob was calm, not sweaty or stressy, I was relaxed, a bit warm but all arms and legs in tact etc and I couldn’t believe I had just been riding for an hour yet it felt like only 5 mins! We achieved so much in that hour I was gobsmacked, I thought it was mainly flatwork but we progressed to a small cross pole jump half way through and by the end of it we were jumping just under 3 ft with no issues – no fighting or charging….at all! Considering it’s the third time we have jumped in two years I couldn’t believe how easy it felt. We approached the fence from the corner of the arena in walk, then a few strides from the ground pole I gave him a bit of rein and a tiny nudge to allow him forward, and over the fence we popped calm and collected! What a difference – and it made me feel super confident even when I seen the fence sneakily going up in height! We are going to work on getting him to understand he has the power and ability to approach fences slowly so there’s no need for the charging or battle.

We are also going to try a few different bits as we think he’s unhappy with the metal bit so will try a rubber one and also the head piece on his bridle as he isn’t a fan of poll pressure so will try a wider padded head piece to see if he’s happier.

I was so happy at the end of the lesson I cannot wait for the next one! Hopefully with a few more under or belt we can get confident to go out to a show for some jumping…even if it’s on grass! Hmmm….!!