Paula's Blog - Give that vet a medal!

The evil one (aka Aria) has still been a bit poorly ☹ The antibiotics she was on didn’t really make too much difference in terms of her swollen glands, so another visit from the vet was arranged. This poor vet, he must have been shaking by the end of the call with the thought of coming back out to see her and take bloods again!

Nevertheless the brave soul came out and although Aria was a bit wary she let him pat her and examine her. First was the mouth examination, on several reassurances from me that she’s is perfectly behaved for the dentist(which she is!!) on when the gag….cue kicking, spinning, and head tossing (and a very embarrassed and apologetic owner!). She did settle within a few mins and let him do a full examination but no issues were found. A listen to her chest and belly and all was good, but next was the task we both were dreading – the blood samples. Shockingly she was fairly good at the start with not too much of an issue – ¾ through and just one more vile to go - she tensed her neck and out popped the needle 😫 the next 25 mins were spent with her leaping, pawing, rearing , spinning, head butting – you name it she did it! Tried food distraction – nope, walking in circles - nope, even her trusty favourite brush on her itchy spot – Nope! 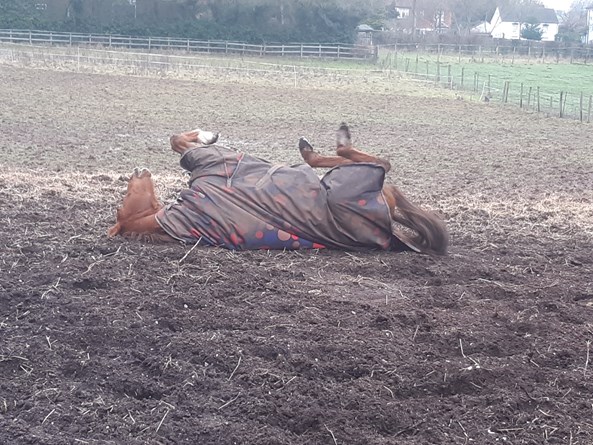 Luckily after the big tantrum and backing her self into some tape we had across the yard she stood perfectly still so the remaining sample could be taken! Phew! The vet is being nominated for vet of the year I tell you (he will also be requested every time she needs to see one as the man has no fear!). She had every blood test run (thank heavens for insurance!), even strangles and all came back clear which was very relieving, the only result we had to work with was slightly high WBC and SAA again so puzzling for the vet as to what the problem was. We started her on a different type of antibiotic (luckily granules this time that she eats) and they have started to work – one gland is completely down and the other decreasing daily so she’s having an extended course which should hopefully clear it all 🤞 hurrah! She has also managed to tweak her leg from one of the days out in the field but the Like Ice clay has helped bring it down 😊 although she is sporting one random white leg! 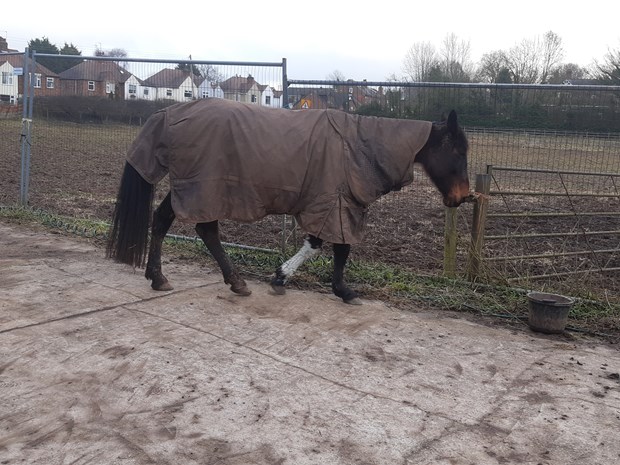 The neddies have been in for a few odd days this week due to all the snow and rain making the field like a swamp, this has been much to their dislike as they do enjoy a gallop about. I did treat them to a few pressies to keep them occupied - Autumn got a likit- but wow I forgot how hard they are to open – pliers and scissors and I ended up using brute strength to rip it open. Bob got treated to a swinger fibre treat too and Aria a fibre block. Safe to say all were completely gone by the morning! I’ve now hung a swede up in bobs stable to replace the fibre treat but he has ignored it completely the snob! 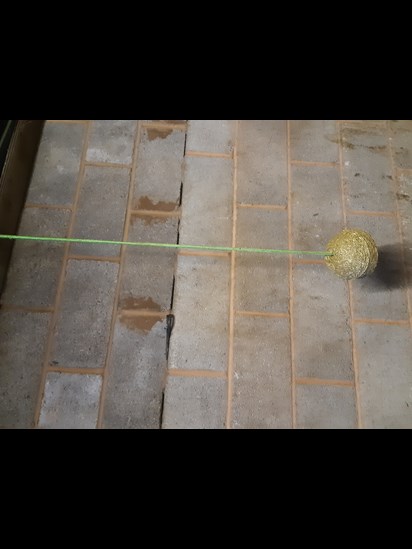 You know when you have one of those things you have always worried about happening at some point – well Bob did one of the things, oh and he picked one of the coldest nights to do it too (‘go big or go home’ must have been in his head)! It started as a normal afternoon - we went up as usual to muck out as it had been a rainy day – and he decided to barge out of his stable at full pelt as he wanted out – on doing this he completely took the water tap off that’s outside the stable and sent it flying across the yard! I can’t even explain the amount of water that jetted out – we have very high pressure at the yard and there’s no way to shut it off apart from the stop cock that’s located in a hole in the ground – all the way across the field! We have only ever seen it once so despite both of us looking and stabbing the ground with a fork we couldn’t locate it. 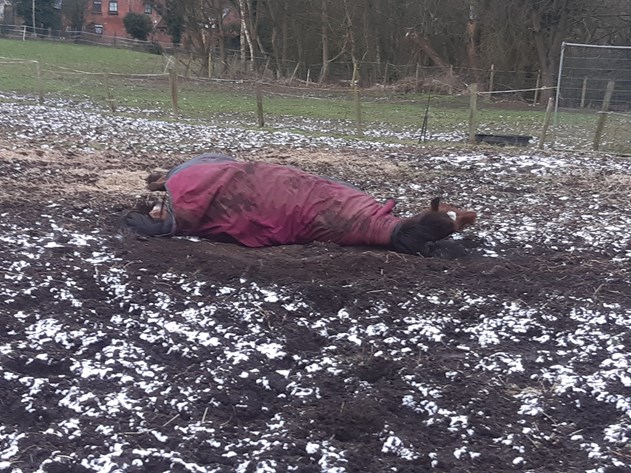 We called the water company and waited for them to arrive (3hours) but during that time tried to redirect the water flow with plastic pipes to stop the stables flooding – I have never been so wet and cold – I had puddles in my wellies and soaked through everything! The water gushed out and it was like something out of a comedy movie. When the engineer arrived he said ‘ you look a bit wet’ as I stood there dripping from head to toe like I had just been pulled out the river!

Luckily the water was shut off and the next day we managed to repair it, but lets just say Bob is still not out of the bad books……its going to be a while for him to make up that catastrophe he created! We have moved the tap over a bit to avoid this ever happening again (and because I’ve wanted it moved for ages) and now Bob has a bit of a complex coming out of his stable which I am working him through – he gets a bit panicky since that night (no surprise really but his own fault) so I am trying different techniques to get him to walk out calmly and not barge which is difficult with a horse his size but we will get there! My partner tried to look on the bright side....eventually (when he was no longer blue and soaking) and said ‘oh well your fear has happened and we dealt with it’ – that’s quite a good bit of advice to be fair – just shows you can worry about things but you can also get past them!!