The weather has been a bit awful with the high winds and two days of snow. The horses had to stay in for a couple of day with the winds and rain (much to their displeasure) as I didn’t want them galloping about and slipping over (main culprit would be Bob). I did entertain them with some fibre blocks alongside their hay and feed balls which seemed to go down well. I do like them to forage about in their stables to alleviate boredom and also to ensure they don’t always have the head/necks up when eating from a hay net (I would have a hay bar but know Bob would trash his and Autumn/Aria would not eat from one) and hay on the floor is okay in small quantities otherwise it becomes mixed in with their bedding and wasted. The snow did bring cold temperatures and the ground did freeze which meant they could go out for a few hours yippee. 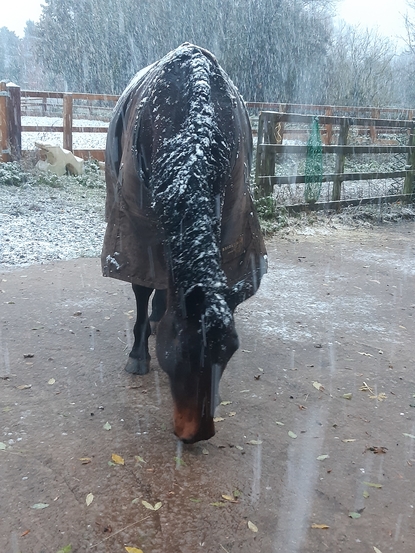 Well, it didn’t quite go to plan – I got them all out to the field fairly calmly but on releasing Bob, Autumn decided she didn’t want to wait, fly kicked at me just missing my head and then full force knocked me to the ground sending me and the contents of my pockets/head torch strewn across the field. I have a fair few bruises but luckily kept my head up as I fell so that didn’t hit the floor, but as the ground was so hard I hit my wrists and cut open my left hand, not great when you still have 2.5 stables to muck out. The ‘so called geriatric well behaved horse’ was not in my best books for a day or so but has been forgiven….until the next time I’m sure! The second morning the temperature dropped right down to -7 not very pleasant, and it froze our water tap! Although I had said to my partner ahead of any bad weather we would be filling lots of containers etc with water – we weren’t prepared in time for this cold blip as we didn’t realise it was getting that cold! Ensuring the horses had enough water is such an important issue especially in cold temperatures as some horses don’t always drink enough which can lead to things like colic. I always give my horses watery mash with their dinners to up their water intake, soak their hay and give them vegetables. Safe to safe last couple of days we have been ferrying water to the yard from the house in containers – lesson learnt – we will be filling everything we have once it all defrosts! 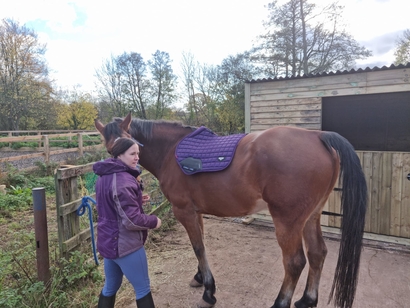 I received the phone call I had been waiting for last week – my clippers were finally in stock! They arrived the next day but due to the weather I’ve not been able to use them just yet. They need a 24 hour charge and then hopefully I may get a chance to use them at the weekend. It will be very interesting to see Bob’s reaction as they are very quiet compared to my old ones although I will be using Autumn as a guinea pig to get used to them (her coats already grown back so needs doing again). I do have sedation ready to use for Bob but I am going to try without it to start with just to see his reaction as I would love to be able to clip him without needing to sedate him each time.

Aria has finally moved into her new stable! She’s still a bit unsure as although she can see the others she’s about 10 meters across the yard from them, Bob seems okay by not having her next to him, they have called a few times but no stress behaviour is present which is good, and Autumn couldn’t careless! I think the move will be good for Aria as I know she didn’t like Bob popping his head into her stable and she also likes to lie down which she now has more space to do. We still need to get a light sorted for it as at present I’m using a head torch and battery operated one but they aren’t that great. 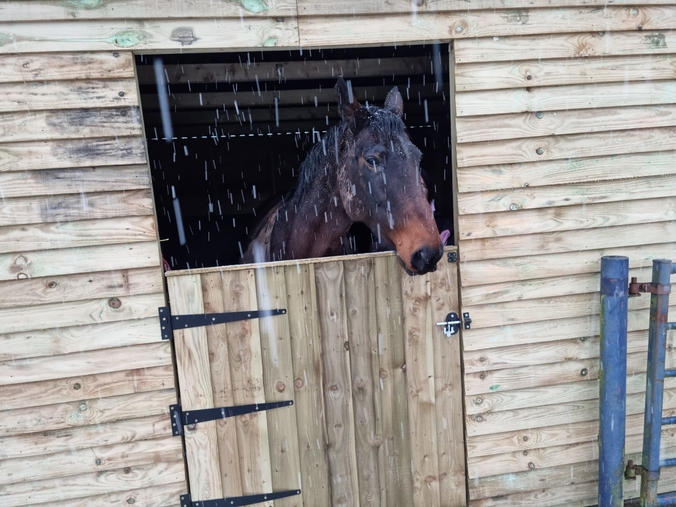 Bob and I haven’t been able to have any lessons recently as my instructor has an ill family member. So I don’t want to put any pressure on her until she’s ready to resume in her own time. I have been doing schooling and pole work with him although in the evening there’s no chance of any jumping until I get the lights out of the attic and up to the yard, I was hoping to get him to a show before or over Christmas but it looking unlikely, so I will keep up with his training from my side until she is back and aim for 2022 as the start of the competitions again. Although it is frustrating with things out of your control, I find being flexible with your goals/targets takes the pressure off – I am a stickler for keeping to time scales but when things can’t be helped I’ve become a lot better at just re ordering the plans and at least with a wider time frame I can properly plan and prepare for the next season.