Paula's Blog - Our first competition and we got some frillies!

Its been all go the last couple of weeks – we’ve started our lessons and been out to a show which has been fantastic!

The weather held up nicely for Bob and I’s first lesson in almost 2 years! The lesson started out well with me explaining a bit about Bob’s history whilst warming up. We progressed to trot which he did nicely,  but I did warn her about 20mins in he tends to ‘wake up’ and speed up…..a lot! 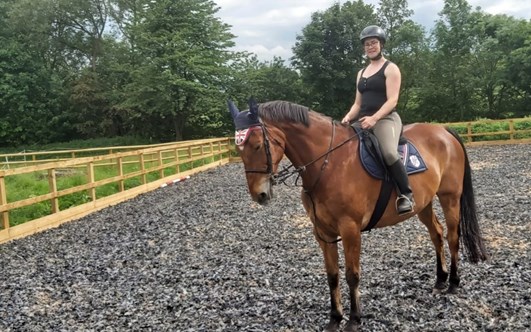 He was a bit agitated by flies despite the coating of repellent I put on him so he was a bit difficult to keep his head down initially but he eventually settled. The trot did speed up but we worked on smaller circles and downward transitions each time this occurred. We then progressed to cantering and again a bit fast initially but after some work and changing the circle sizes regularly he began to come back. Next were the poles to practice our straightness and steering – one at either side of the arena – the first few attempts were…..erm interesting I guess you could say?

Nearly running your instructor over in your first lesson isn’t a good idea - oops! We did get it in the end though and he slowed more for the turns and balanced himself. We then braved a few jumps and although a bit excitable we finished on a perfect approach and landing which I was so pleased about! I’ve got into a few lazy habits I wasn’t aware of that I’m now sharpening up on and making sure I don’t do, and I’m more conscious of when Bob falls out especially in canter so hopefully all this will help us progress! I rode him a couple of days after the lesson practising what we had learnt and he was brill, again a bit fast but he didn’t fight me and we got it by the end of the ride!

Autumn had a good scrub and tidy up and went out to her first show of the year at the weekend, doing jumping and an in hand class! Getting her ready was a bit stressful as I needed to plait her up on the yard – and for some reason every band I used wanted to snap argh not good when you haven’t plaited for years! We still got to the show on time and I was able to walk the course without too much of a rush – I did have to go over it a fair few times – amazing how you lose the skills of remembering when you don’t do it for a while. I seen the course had a couple of Winnie the Poo and Eeyore fillers – and thought few she’s seen them before at other shows and will be fine. Well, I know she’s not confident jumping on grass, but the cheeky devil almost stopped at both sets of fillers! An encouragement nudge and a few words got her over them however, and aside from a few hesitant moments she jumped very well. 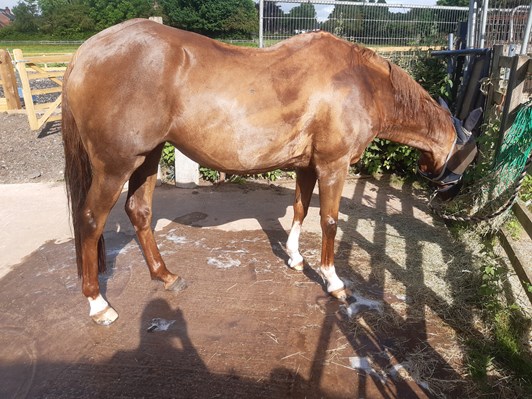 We were in the lead but a late entry came in just as the last rider finished who pipped us to the win, however I was very happy with 2nd place for our first outing and with it being on grass! We did try the next class but Autumn decided she wasn’t ready so after a few stops at a fence I asked if I could just get her over (we were last entrants) which they happily agreed, one more attempt and over she popped followed by a lot of praise before I retired her as I wanted her to have a positive experience. Next was the in hand class, I rusher her back to the horsebox realising I hadn’t yet plaited her tail, frantically plaiting it, whilst switching jackets and making sure her legs were clean etc. The class hadn’t started by the time we got there luckily, so we had a minute to catch our breath. She behaved very well in the arena and trotted beautifully, and I’m shocked and pleased to say she came away with a red frilly!!!! I was over the moon! I need to work on my plaiting as a few buns came loose (probably whilst jumping) and a few other really helpful comments from the judge (I did explain we were complete novices) but all in all a hectic morning that was so worth it, and we were lucky to get home too before it all got a bit too hot. It was a great day and I’m so pleased with what we achieved at our first outing. I need to do a bit more jumping with her at home and my partner now needs to work out how to make me some scarier fillers!

The next show is July although there’s another one down the road at the end of June but it is just showing classes. I’m toying with taking Bob if I can find suitable classes for him for the experience and getting him out again although I am more conscious I want him to have a few more lessons so we shall see 😊 Aria’s still being built up slowly so she won’t be out for a while just yet although there is a showing show at the end of the summer so you never know! 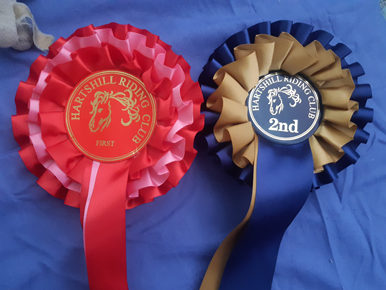