Paula's Blog - Plans in the making

The horses have been loving the current weather and so have I as they are finally living out hurrah! I do not miss mucking out the stables I have to say!! (plus its also nice arriving in the light at the yard in the morning and seeing the wildlife in the fields - 2 days in a row I’ve seen a little muntjac deer with the horses 😊) 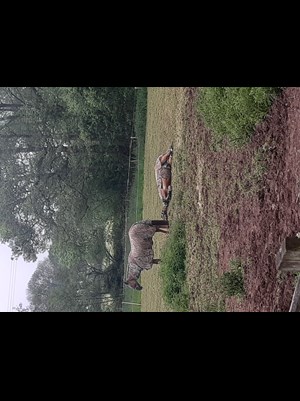 The grass has shot up at the yard so I’m being cautious when opening up new sections and also ensuring the horses have access to hay too (as I learnt only too well last year with Bob gorging on grass and getting colic so following the vets advice of additional hay). With the warm weather has come the flies and the heat too so I make sure the horses are kitted out in fly repellent and rugs/masks whilst also having access to the shade (and not forgetting the factor 50 sun cream for pink noses). Being by a river is nice but it doesn’t half attract the mozzies, but I think I have found a fly spray that seems to work (fingers crossed anyway). 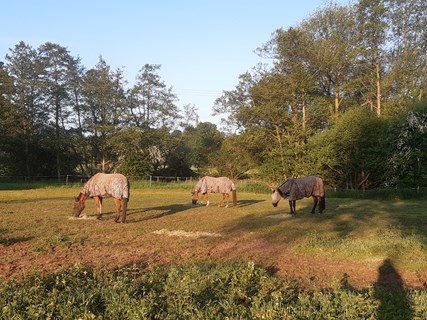 I’ve been quite organised over the bank holiday, and alongside doing yard tidying, managed to jet wash a few indoor rugs and dry them in the warm weather, and sand down several poles and completely repaint them ready for getting back into jumping. I’ve painted a few to match my fillers or wings but also want to make some that are spooky and make the horses look at them so will be trawling the internet for ideas! Autumn is absolutely loving jumping again and I have to hold her back on the approaches as she’s so eager – I have put her back on a joint supplement though as I’m sure at her age it will help her joints especially as she definitely doesn’t act her age! We have our first show on the 12th which I’m looking forward to doing – so far we are just doing in hand veteran and small show jumping, but they have said if there’s space I could possibly go into the ridden showing and the novelty classes later on in the day if I wanted (I could give my partner the experience of the ring by entering Autumn in prettiest mare?).

Bob on the other hand is now going to be having some training at home, he’s started to get very forward as he’s getting fitter and is getting a bit difficult at times so I want to nip this in the bud before fully progressing to jumping. I’ve changed him back to his hanging cheek bit but with a drop noseband and I have a lot less battles with him which is nice although I can feel his energy and eagerness to go. I’ve found a local trainer who is going to help us and also get us back jumping - we have our first lesson next week which I’m very excited about! I’m hoping to have him ready for a show of some sort in July – may not be jumping – I may try dressage just to keep him relaxed and without pressure for his first outing as his head does spin at the sight of an arena full of jumps. 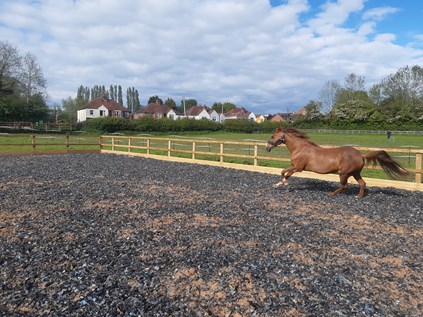 Aria had her flu jab the other week – its always a day the attending vet and I dread! But it was the same vet who jabbed her the year before, and shockingly enough Aria behaved impeccably – I gave her a brush (she loves being groomed) and whilst I did it the vet injected her- a slight raise of the head and that was it nothing more! Could it be she is now more accommodating of her jabs? The vet was so pleased she spent a good while fussing her after which was nice 😊 The poor vet though – I now have her name and the vet who treated Aria when she was ill in Feb so I will be requesting those two if she ever needs them as she seems to tolerate them both 🤣

Has any one started making a list of shows to attend? I will see how Bob gets on but I already have a few planned over the summer for Autumn alongside any fun rides that appear! I may even enter the evil one in a showing class or two at one of the local shows just down the road…..