Paula's Blog - Think I need a rest after this week!

What a corker of the last few days! We’ve achieved quite a lot in a short space of time!

We have had Aria’s stable built now hurrah (although my bank account did not rejoice), the guys turned up and had it up quite quickly which was brilliant, they’ve also secured it into the concrete so no chance of it blowing away! Its made such a difference to the look of the yard, finally with the mesh fencing down, and the cattle crush gone it Is beginning to really look like a horse yard. We also managed to get the final summer field scarified, harrowed, seeded and spread some muck too, phew what a lot of work that was (and changing a tyre on the mower too which was not easy). 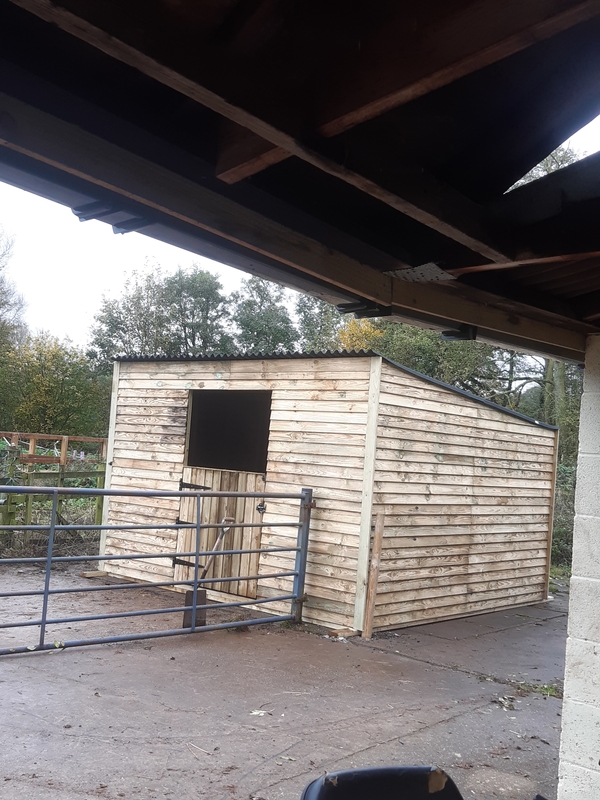 We have decided to cement all round the edges of the stable just to make it fully water tight and I’ve asked my other half to prepare himself to do the rubber matting at the weekend (he hates doing rubber matting lol!), hopefully once all dry and the matting fitted we can get her in there soon. I need to book an electrician to reroute a wire going to an old orange outdoor light on the barn to the stable so we have some lighting too, but in the mean time I will use battery operated ones for mucking out as I’ve seen a few suggested on Facebook that look pretty good. I am hoping Aria will be pleased with it (and also by having some space away from Bob as he does like to annoy her over the stable door), she seems quite happy tied up next to it and standing outside so hopefully will be okay inside it. 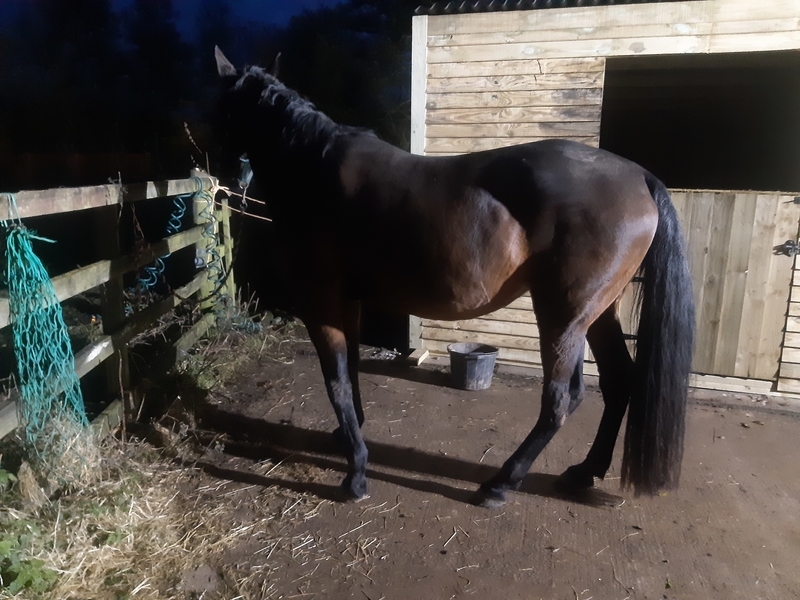 I’m a bit concerned as to how Bob will deal with her moving across the yard (only a few meters but not in plain view), as we had quite a bit of an upset on bonfire weekend. A farm across from us did not give us any warning but held a public firework level display across the road from the yard with the loudest bangs I have ever heard. The mares were very scared but poor Bob was frightened out of his wits, I had been giving them all calmer all week (he’s on it anyway but double dosed him a couple of days in advance in anticipation of normal fireworks) but nothing could have prepared us for what happened. I was so scared for him as he didn’t know what to do with himself and was running round the stable into the walls, such an awful experience and I felt so hopeless as I couldn’t help him. Over a week on and he’s still not himself, he’s extra skittish and when riding in the evening at the top end of the school he goes extremely tense looking round as if to say he’s expecting more fireworks – he even jumped at a cars headlights through the bushes ☹ We have had words with the organiser and are hoping they will be more considerate next time especially as they are in the middle of 3 horse yards. On the plus side from this awful event, I have now been speaking with one of the other yards close by so have another horsey person in the same area as me to talk too, as since we moved we haven’t really met many people with lock down etc! 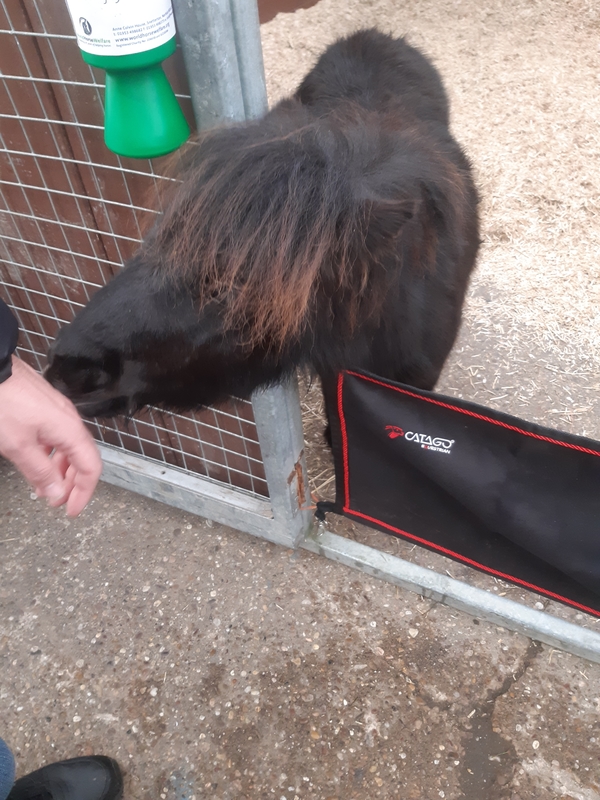 I have to admit, I had felt quite low since that weekend as I felt I had let Bob down with him going through that awful experience, so I wasn’t myself at all either as I wasn’t sleeping properly from the stress of it all and it made me quite unwell. I started to feel better on the Thursday when the stable was being built and I had a nice ride on Bob in the morning even including some jumping which he did very well! It also helped I could thrust myself into manual work on the fields to vent some of the stress, and boy did I work hard. I did also have Your Horse Live the next day to look forward to! I had a great time there and got to meet the cutest horses in the rescue village including a tiny youngster who took a liking to dribbling on my coat – I really really wanted to take him home! I also got some great bargains on breeches, pre ordered some quiet clippers to get the big lad clipped, bought a new jacket and finally got the saddle pad I’ve been after for months but couldn’t justify buying (well until it was half price at your horse live that is). I’ve now got the Loire Blackcurrant CC pad which I cant wait to try on the horses – my other half technically paid for it with the early Christmas present money he gave me but I’m going to work on him to let me use it ahead of Christmas. apparently my justification of the horses will look so pretty doesn’t impress him?? Hmmm!

This week and weekend are going to be another busy one – stable to do, riding club AGM, and two lots of pilates as I missed the previous weeks (definitely seeing the benefits of doing it again especially in my riding but boy do I ache sometimes afterwards) plus another lesson. 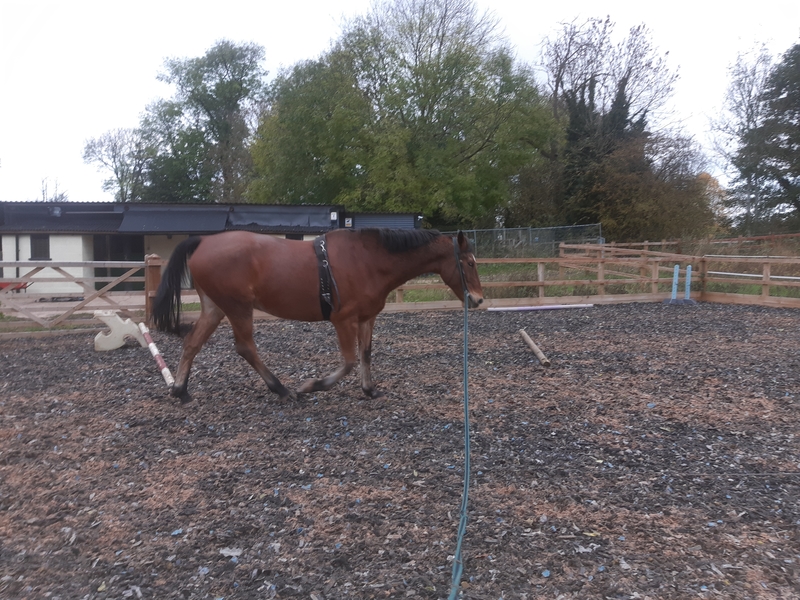 I’m hoping in my lesson this week to discuss arranging sessions every now and then for Aria as I am starting to bring her back into work over winter, Autumn will have a bit more time off as she’s started to stiffen up a bit so Aria will take up the reins. I just want some guidance and someone on the floor to help me when starting to get her fully under saddle so the discussion will be had to see if my instructor will be brave enough to help take her on.