We managed to get two lessons in, one on each weekend for Bob. The first one was fantastic, we did some bounce fences (which yes I was worried he would revert back to his old ways and jump as a spread instead of a bounce – but luckily he didn’t!) an upright and a cross pole, which were combined into a mini course to get him used to jumping multiple fences without loosing his head. The variety and different striding also made him concentrate more. He did so well in this lesson and jumped great – I gave myself a telling off as for some reason just once at the cross pole I lost my nerve and was a bit hesitant which he immediately felt and ducked out on approach. 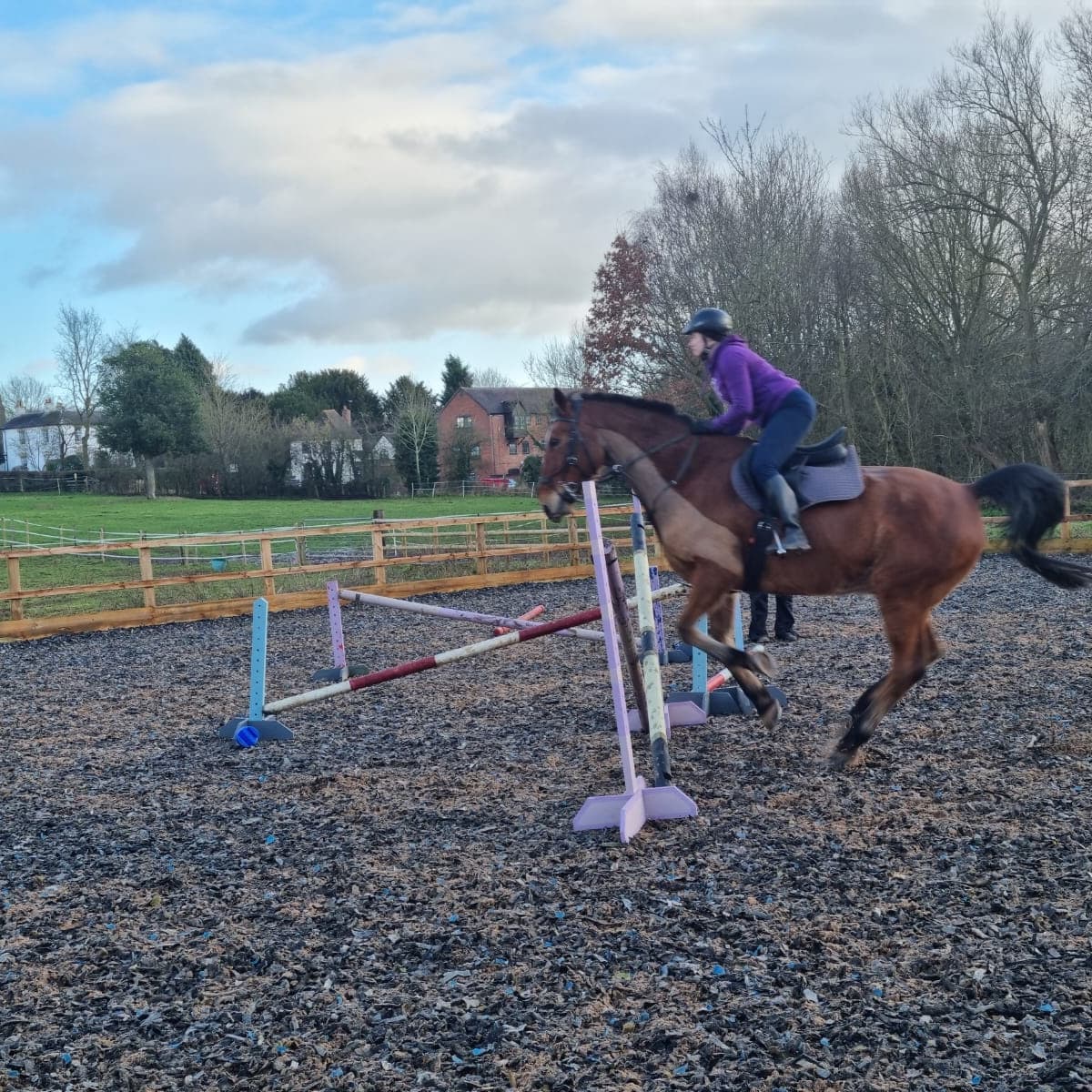 A stern internal word with myself and we came at it again fine, then straight on to the bounce fence and the upright twice. It made me realise how sensitive he is to me so I must always ride positively and put my trust in him as he will jump anything from any stride – but I get worried when I cant see the stride d’oh! We finished the lesson on a huge high as we did a couple of the mini courses so well and even cantered from one fence to the next calmly! My instructors advised she wants us to go straight in at newcomers or discovery when we start out competing – eeek! I was hoping for a few smaller unaffiliated classes first! 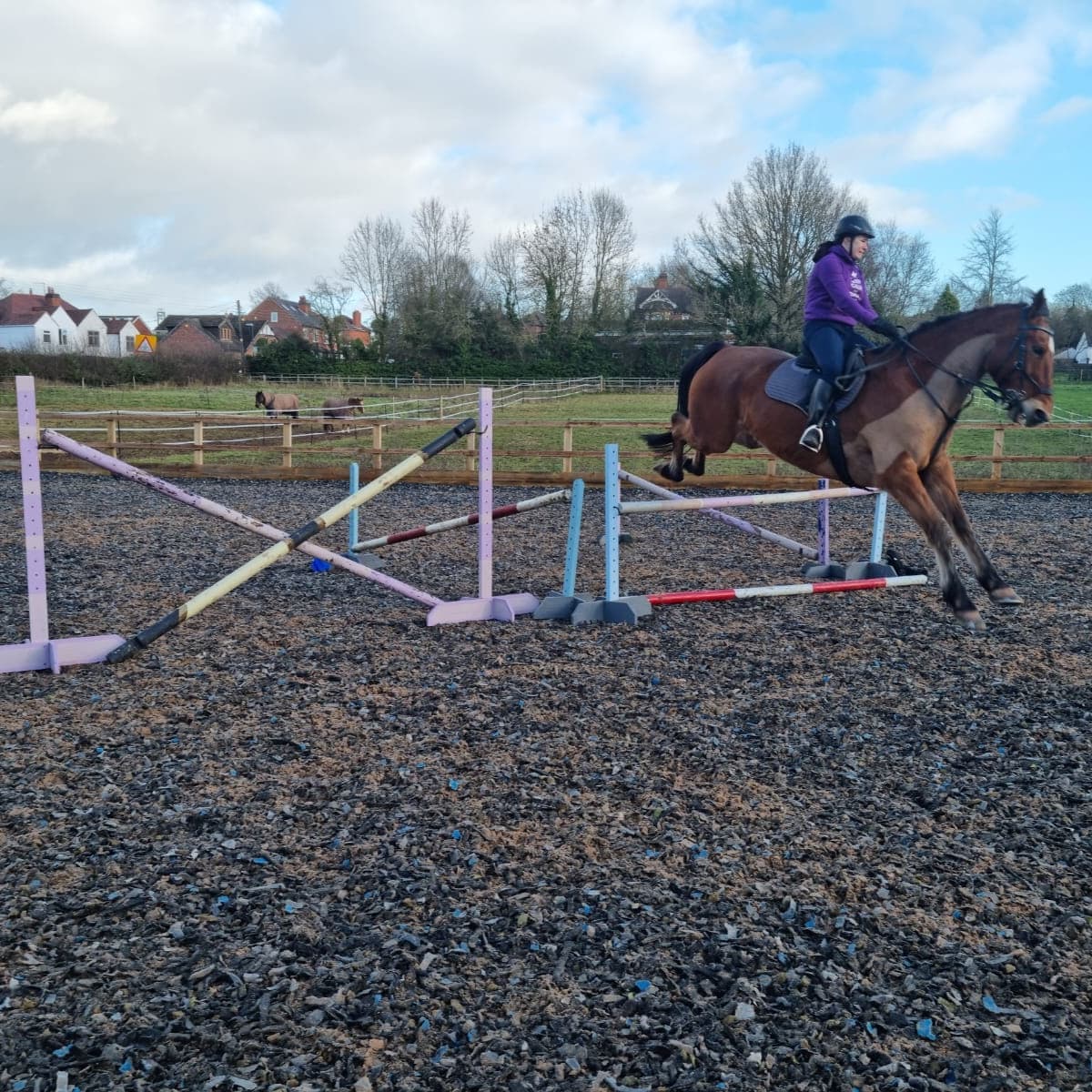 I was buzzing for the next lesson and couldn’t wait for the following weekend. Bob however decided everything had been going so well it was time to ‘spice’ it up and scare me! The Saturday evening I decided to lunge him so he wasn’t too fresh ahead of the next day’s lesson (and because it was far too cold sat morning to ride/lunge). He had only done 5 mins of trot and as I went to switch the lunge line round I noticed a small trickle of blood coming from him nose. That was it – Panick mode ensued! If it was a pals horse I would be calm, assess the situation etc but as it was my own I was shouting my partner like Bob had lost a leg! I’ve never had a horse have a nose bleed which is why I think it scared me so much. To be fair it was only a small trickle and thinking back he had coughed once and sneezed twice just before it happened so was more than likely a burst blood vessel. It stopped in less than 5 minutes and he was absolutely fine eating and playing as usual trying to knock my partner over. He must have thought (and I know my partner definitely did) – what the heck is she getting in a big flap over now?! I did watch him closely regularly inspecting for any sign of blood but luckily there was none, and the same the next morning – I even checked him twice whilst out grazing – poor horse being made to stop eating whilst a head torch was shone up his nose! We decided he was ok for the lesson – but 10 mins beforehand something in a field opposite (no idea what) completely freaked him out – he was dancing whilst being groomed and tacked up – would not stand by the mounting block – then when I did get aboard and only had one stirrup he had a full blown freak out. My instructor was brilliant keeping me calm as we spun, bounced etc round the arena – she even described him as being off the planet with how he was behaving. We let him calm then gave him a good reassuring pat and gently began to walk round the arena with her by his side for reassurance. Within 10mins all was good, still tense but no freak outs. We decided trot pole work was all we would do, which was disappointing following the last lesson, but we did have a good session in the end. We discussed his behaviour and have decided to try changing his feed again as she noticed him slowly hotting up over the last 2 months – so he is now on a diet of high fibre mash and readi-grass only to see if this works as we think the chaff with oil or the balancer are having a bad effect on him, hopefully he will keep condition and calm down slightly. 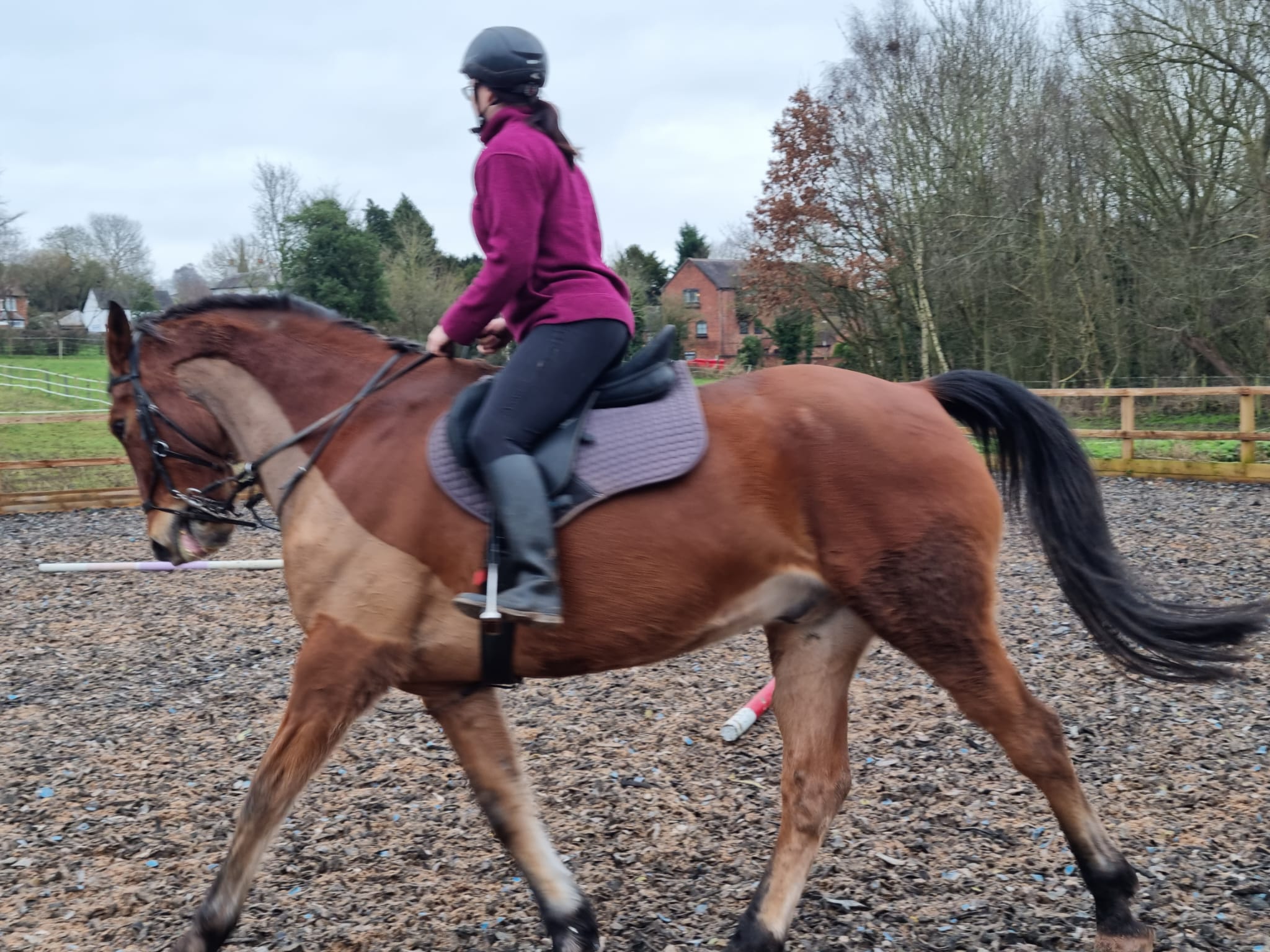 Autumn’s been enjoying ridden work more – she's been jumping over trot poles again instead of trotting them so we did some jump practice at the weekend and she loved it. I will see how she goes as I’m still not sure if she will be happy doing a full course at her age but I will let her decide – I'm just so pleased she's still able to be ridden.

Aria is currently getting used to a plastic bit I bought her – she doesn’t seem to get on with metal ones so I thought this may be an option – first lunge session and she threw every shape she could – kicking out, galloping, stamping, bucking you name it. Then she realised ahhh this isn't getting me anywhere and decided to calm down. It is a straight bar bit so its taking her a while to get used to and realise she can still eat treats with it in her mouth lol but she's getting better each time.

I want to wait until she is settled with it before reintroducing the saddle then getting aboard for both of our safety!