Wow! What can I say! The show was amazing, and the big lad did me proud. I braved it and booked in for the final two classes of the show. It all sounded great in theory, but I have to say in the hour leading up to getting him ready I started to feel a tweak of nerves. Bob seemed to be on good behaviour especially as he had only had his normal one ‘shot’ of calmer and loaded perfectly first time with no issues. On arrival at the show it was hectic, but on unloading him again he was fairly calm. Off to the warm up and I spent 5 minutes leading him around and chatting to some competitors I recognised. Once aboard I expected him to hot up but he kept his head (what is going on I thought). Another friend rode up to me and we walked the horses round together to warm up whilst chatting – it made such a difference to both Bob and I as it helped us both settle and lessened my nerves.

As usual we kept to just walk and trot to not blow his mind, and aside from one spook (all he did was rush forward alongside two others as they were all surprised by some dogs opposite), he did very well. We went up for our turn in the 80cm and although quick we jumped well, we just had a bit of a dispute at fence 7 as he got confused and side stepped meaning we had to circle and re jump, but aside from we had a nice clear - although we did miss out on a placing. The next one, 90cm, I was excited for as the last round had gone so well. Off we went, jumping well together, we cleared everything and he got a lovely round of applause, and we were the first clear! I had taken him intentionally wide to the last fence as I was aiming for a clear not speed, but to my shock when the results were announced – we had come second!! Only beaten by half a second!! I was over the moon, our second time attempting a 90cm course, our first clear and a blue frilly! Bob made me so proud that day and proved our training is helping us progress! I cannot wait for the next show, and am so happy we have moved up the heights so confidently – we are on track for our 2019 goals! Just need to ensure he keeps his head as he was a  bit excitable the other evening to the point he was coated in sweat and needed a bath!

Autumn has been practising a new dressage test finally – trialling Intro C – we have work to do but we are getting there! The flexibility/bending is an area that needs a lot of work so I’m alternating using side reins. I have also tried varying her activities to prevent her getting bored – long hacks, schooling, jumping, lunging etc.

Aria has been doing a bit more work with poles, and also having her saddle on again in preparation for more ridden work. A bit feisty on having the saddle and girth put on but settled fine once it was done which is progress. She is definitely going through a grumpy stage again as her behaviour when being worked is getting very bolshy, like she is trying to be dominant – unluckily it doesn’t work with me! Let’s hope she snaps out of it soon so I can brave getting back aboard argh!! Wish me luck! 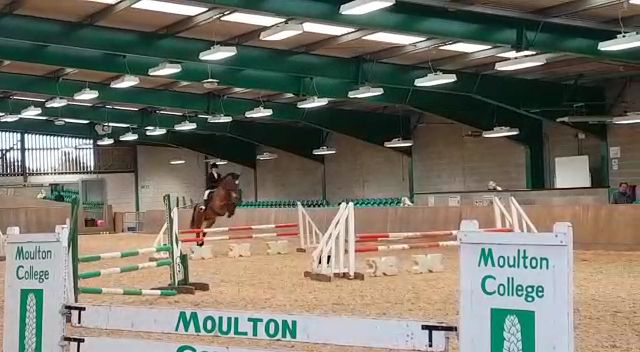