The Trio - up to no good

The trio have definitely been up to no good the past couple of weeks.😈

Unfortunately being on lock down again due to the weather, then on being let out for the odd day they show their gratitude by trashing as much of the electric fence as possible!

No idea why as they all have grass, I think they must have just got very excited or hyper!

On arriving at the gate one afternoon I did have a moment where I lost my breath as I looked in to the fields where they should have been and the fences were down with no horses in sight!

Luckily I spotted all three of them looking at me bright eyed, ears pricked…. From the arena area!

Grrrrrr….yet more extra fencing pulled down. When it came to bring them in, all three walked in beautifully on their best behaviour and walked in together (1st time I have ever been able to lead all three together at once).

I suppose that was one positive note before I had to go an trudge the deep mud to repair fences (almost falling on my backside multiple times). 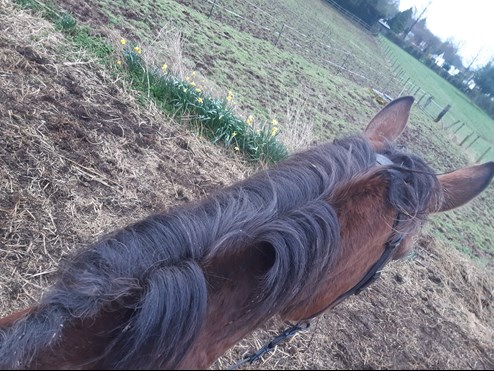 On the plus point we had the new farrier out. I was very nervous about this as the horses were still settling and I didn’t know how they would behave for him, we also had a lovely rain storm that had descended just as he pulled up.

Nevertheless we got on with it, out came Bob who stood impeccably for him, much to my amazement – not one hoof wrong.

Autumn was next and after me saying – she’s fine, been shod for over 12 years, stands beautifully… she must have thought you know what I will show her up.

She was spooking at nothing (the other horses were calm as anything right next to her), tap dancing, barging, head shaking etc – I was so embarrassed as I had said how good she is!

To let her calm she went back in the stable, and I brought out the evil one – I gave the farrier lots of pre warnings…and guess what – none were needed as she stood beautifully!

She’s had both her front shoes off, as I want to see if her feet will harden a bit on this new ground as they seem to be doing a lot better since we moved, but only time will tell if she remains barefoot.

Autumn was brought back out, a few more tantrums ensued and then she suddenly calmed and had her shoes done – the diva mare rears her head again lol.

We did notice one thing with Autumn – hopefully not to jinx it but ALL of her mud fever is gone and the hair has grown back.

The farrier even said if I hadn’t mentioned mud fever he would not have even suspected it! Hurrah that is fab news considering the wet weather we have had!

I’m hoping the weather is going to be improving as I’ve been able to turn the trio out again yippee! They were in all weekend which again they sulked at.

However on offering them extra treats it soon perked them up – the mares had some fibre blocks to chomp on which they loved and Bob got to try a fibre ‘swinger’. Although I don’t think he quite got the hang of it , as instead of biting bits of to eat, he bit huge chunks, shook them, spat them out then did it again.

Safe to say on my return in the afternoon all remnants were gone so he definitely enjoyed it!

I’ve tried so many ways of keeping them entertained whilst in, and to be honest I am very pleased with how they have taken to the restriction.

Fingers crossed we are on the up for the weather and they can be out more….

Although today I’m a bit worried as I braved turning them all out together with full access to the mares and Bobs field!

I hope there is no destruction or fighting (although they do seem to be getting along a lot better fingers crossed).

I have managed to ride a bit more recently, although not a lot of fast work due to ground conditions- and Bob has been brilliant – not once has he been spooky or sharp, always calm and listens to me. 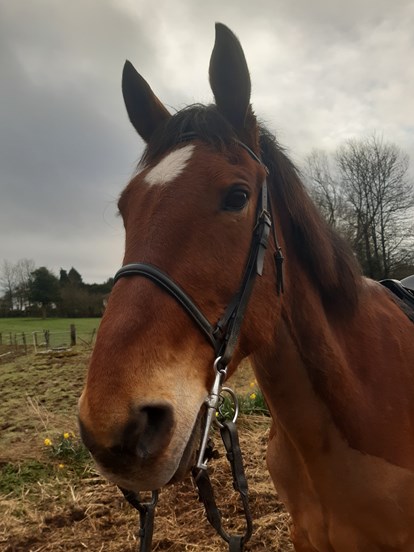 I have been gobsmacked by this but have also been over the moon – I’m really hoping this move has done him good and he is beginning to relax.

With Autumn I’m looking to see if I can find any local bridle paths or hacking routes away from the main road as it is very busy.

I put a chat out on the Facebook pages and had some places recommended to explore but I just need to box out to them once I’ve assessed the parking.

Looking forward to getting out and exploring the new area I have to say!