What a weekend! The brave pants were well and truly put to the test!

Thanks to the snow and freezing temperatures the horses haven’t been able to do much work this week as our arena was frozen; there was the odd day a minimal bit of lunging (10 mins max) or ground work at walk could be done but nothing more. Despite all this, and knowing he was a bit fresh from the lack of ridden work, I decided to take the bumbling giant out for some jumping.

I had aimed to get there before the 70cm class had started as I thought this would be a good warm up for him, but no, as we walked past the arena we seen the class had started early, and panic immediately hit me. We got down to the warm up arena and for once the class list wasn’t big – noooooo - so we didn’t have time to register and warm up to enter it! A feeling of dread hit me as my partner said just go in the next one – a few choice words and a hissy fit from the rider protesting that I was not in a brave mood did not sway the situation and down went our number for the class. Bob was fairly calm in the warm up only spooking once as he had two horses rush closely past him, followed by another whilst he was in mid spook, but aside from this he behaved well and we even managed a canter in the busy arena with no charging or playing up. I didn’t jump him as I now know practice fences frazzle his brain, and I would rather not be sitting on an exploding bull just before we are called! We went up for our turn and I was so nervous due to not jumping all week, I didn’t see Bob was on the wrong leg and we knocked the first fence – d’oh; realisation hit and I ‘sucked it up’ (my choice phrase when worried) to concentrate on the rest of the round – lovely jumping, although quick at times, and he listened which was great. We did have an issue at one fence where he tripped just before take-off and took the pole halfway to the next fence with us (bit of a scary moment), but we got it together to clear the following oxer. We also had a minimal navigation dispute on approach to one fence which caused us to jump it from pretty much a stand still – my choice -as originally I was going to re-circle and jump but I thought hmm let’s see what happens – pleased to say he cleared it effortlessly – and the rider stayed aboard without being propelled and face planting in the sand! So first class – only 8 faults which wasn’t too bad considering the rider was a nervous wreck and the horse as fresh as a daisy!

Next decision – do we do the next one??? My partner encouraged me on a bit but I was hesitant – then my phrase came back into my head and the next thing I know I had told him to get our number down - what was I thinking??!! All confident to start with then as our turn got closer the feeling of dread hit.. I was quite happy to pull out but I knew I owed it to Bob and our progress to go for it – so we did!

Upon entering the arena I couldn’t help myself and said ‘OMG look at the size of that oxer’ (1st part of a double too) – brave pants had definitely worn off and the feeling of utter horror as I heard the bell signal us to start. All that was going through my head was what on earth was I thinking (and is the a medic nearby!!). We approached the first fence with Bob as enthusiastic as ever and I looked ahead in to the distance wanting to shut my eyes but couldn’t – he sailed it, next came a big oxer with fillers – pop and we were over, then on to the next – a minimal tap and the pole went down- nooo so unfair. Another huge oxer (the one I had dreaded – over we went and clear!) but unfortunately a pole down on the second half of the double – the rest of the fences however jumped nicely with no further poles. So we came away with a very fast time but 2 unfortunate poles that put us out of the placings – but that didn’t matter to me, I couldn’t help myself but tell him what a fantastic boy he was with so many pats as we cantered round to leave. We may have had 8 faults but it was our first time doing a 90cm course – he kept me safe, didn’t play up and jumped amazingly! We even had a nice comment from the judge on it being a lovely round with the unfortunate poles (we had done a training session with the judge a few months ago and Bob was a nightmare so he got to see the change in him!). We both had so much fun in the class and I felt a massive sense of accomplishment! I was so grateful to Bob for being so brave and genuine despite the nerves of his rider, and also to my partner – if he hadn’t egged me on I wouldn’t have done it! Another one to tick off our list and now I know going forward we will be doing 80cm as a warm up then 90 and possibly in a month or two (with extra brave pants) a meter class!

The girls on the other hand have been….bearable this week. Autumn’s had the odd hissy fit due to the weather (if she can’t graze and her hay runs out before I get the next lot to her, the madam charges round like a demented buffalo) safe to say my once nice front summer paddock now looks like a hundred horses have played chase round it! But that was nothing – the Evil One as she is still currently known finally got me (I know she was secretly pleased). On leading her and Autumn through my front paddock one evening as the driveway was too icy (me being concerned for them slipping), the dopey mare went past the electric fence that was snapping a bit on touching the ground (no different to their own paddock gate way when I get them out). But when we were about a meter in and I went to relax the lead ropes slightly, she shot forward bashing my back with her chest, kicked me in the right calf (why did I get shoes put on her?) and to top it off cracked me full throttle on my head with her jaw! I was dazed and unable to walk on my leg for a few minutes but luckily Autumn was on hand to support me as I hobbled down to the yard after giving Evil One a gob full to express my displeasure! After checking the horses and getting them into their stables, I put my hand to my head as it still hurt – to find a lovely 2” lump on the left hand side – even though I am quick at healing nearly a week later and the lump is still there along with the graze – lucky for her I could still get my riding hat on. I sure know how to pick my horses don’t I!!

So a bit of an eventful one this week but turned from bad/sore to amazing after taking Bob jumping, looking forward to this lightly warmer front coming in too as these freezing temperatures have not been fun and I want to ride, although it has been very pretty in the early mornings at sun rise 😊 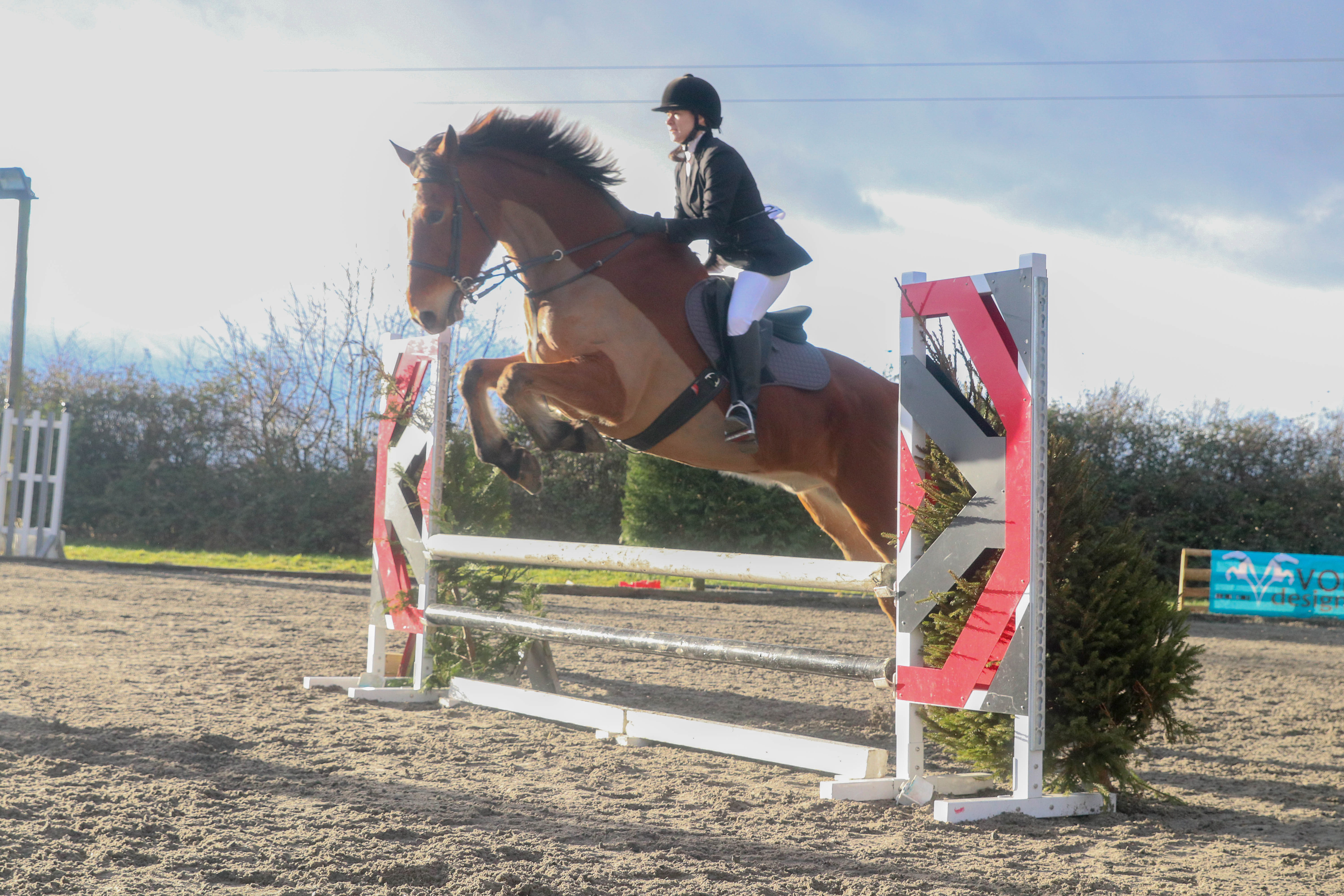